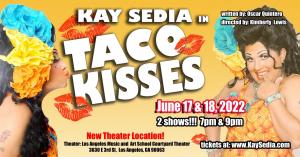 A founding member of the well-known comedy crime-fighting troupe, ‘Chicos Angels,’ Oscar Quintero/Kay Sedia was born in Hacienda Heights, California. Kay Sedia came to life back in 2000, when Oscar competed in the drag pageant QUEST FOR THE CROWN, a spoof of the Miss Universe Pageant benefitting Aid for Aids, as “Miss Mexico Kay Sedia” and was named first runner up. Having performed in clubs and a few films, Kay pivoted her focus to Tupperware sales. She hosts Tupperware parties all around the country, and is one of the top selling Tupperware Divas in all of the United States and Canada.

Taco Kisses will be presented as the first show in LAMusArt’s summer Comedy Series at the Courtyard Stage on campus. The Comedy Series, which will run from June through September, will feature other acts including stand up comics, improv teams, a live podcast and sketch.

Tickets to Taco Kisses are now available at www.kaysedia.com. For more information on LAMusArt’s Comedy Series, please visit www.LAMusArt.org/comedy or call LAMusArt at 323-262-7734.

About the Los Angeles Music and Art School
The Los Angeles Music and Art School is a 501 (c)(3) non profit arts organization whose mission is to provide East LA with equitable access to quality arts education programs. Established in 1945, LAMusArt is the only multidisciplinary destination for high-quality arts instruction located in the community. The organization aims to offer accessible and affordable arts education to young, at-risk students regardless of their gender, ethnicity, aptitude, or socio-economic status, year-round. # # #