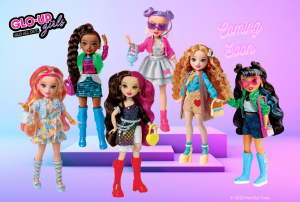 Glo-Up Girls Season 2 dolls will "Glo All Out" at Walmart and Amazon in August 2022. 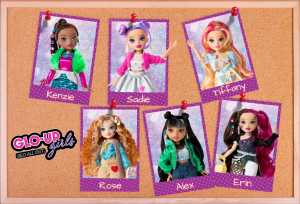 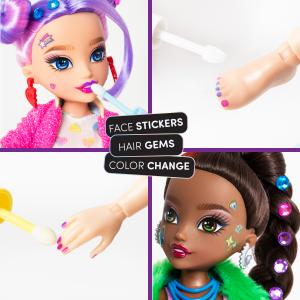 The hottest up-and-coming fashion doll line gets a makeover with new looks, fashions and hair gems you can wear.

EL SEGUNDO, CA, UNITED STATES, June 16, 2022 /EINPresswire.com/ -- Far Out Toys revealed today that its hit fashion doll line Glo-Up Girls is getting a fabulous #Glo-Up this summer! Each of the six fashionable characters will “GLO ALL OUT” with new looks, new styles, new hair and exciting new ways to transform. Glo-Up Girls “Season 2” dolls will debut in August at Walmart stores nationwide, retailing for approximately $19.97 each. The company released images of the new dolls on the Glo-Up Girls Instagram channel.

While Season 1 dolls came with pajamas and spa masks, Season 2 Glo-Up Girls come already glammed up in trendy fashions and jewelry. Kids can further change up each doll’s look with an array of surprise accessories including additional earrings, shoes, socks, face stickers, and color-changing lipstick, manicures and pedicures. In addition, each new doll comes with gorgeous hair gems you can use to bedazzle your doll’s hair as well as your own!

Glo-Up Girls dolls were inspired by the #GlowUp trend which has more than 50 billion TikTok views. The Glo-Up Girls brand encourages children to express themselves and celebrate what makes them unique. The Glo-Up Girls entertainment platform includes The GLO Show, a reality TV style series featuring teen influencers living in the Glo-Up mansion, and original music by Far Out Records, including songs by the new singing sensation GLOTIVATION. The GLO-UP GIRLS TV YouTube channel has more than 15 million views to date. Glo-Up Girls dolls are available in multiple countries including Australia, United Kingdom, Ireland and Israel. In the United States, Glo-Up Girls are currently carried at Target, and are coming soon to Amazon and Walmart.