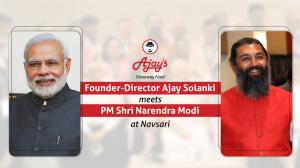 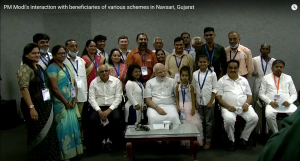 Meet with the PM of India 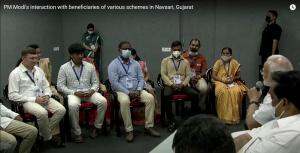 Meet with the PM of India

It was a proud moment for India's fastest-growing QSR chain's Founder Director for a remarkable opportunity to meet the PM of India, Shri Narendra Modi.

It was a proud moment for India's fastest-growing QSR chain's Founder Director as he got a remarkable opportunity to meet the Prime Minister of India, Shri Narendra Modi.

Ajay Solanki was among the few attendees whom the PMO had invited. The convening was in light of the government's several schemes and subsidies allotted to numerous citizens, including the MSME business owners for fast-tracking their growth and accelerating the PM's vision of "Atmanirbhar Bharat".

Ajay Solanki remarkably presented himself as the coalition of "Atmanirbhar Bharat". His fast-food chain - Ajay's Takeaway Food, co-owned by his brother Jaideep Solanki - is a stark example of providing individuals an opportunity to become an entrepreneur through their franchise model.

Shri Modi asked him several questions upon his meeting, to which he replied valiantly.

"How has Ajay's helped in the momentum of Atmanirbhar Bharat?" Asked the PM.

Solanki said, "Ajay's is an organized fast-food chain offering best quality food at an affordable price to the common man of India. We have 111 franchise stores empowering 100+ individuals to become entrepreneurs. 400-450 employees work at these stores, making them the breadwinners of their families."

"Where is Ajay's operated from? What is the most popular & highest selling product of the brand? How many people consume daily from Ajay's?" Shri Narendra Modi continued to satisfy his curiosity.

"Though Ajay's has numerable branches in entire Gujarat, it has Head Quarters based in Navsari. The most popular and loved product of the brand is Cold Coffee and Every day approximately 18,000-20,000 citizens enjoy Ajay's delicious pizzas, burgers, and cold coffee", answered Solanki.

Established in 2014 with just a single outlet in Navsari, Ajay's has grown to 111+ franchise stores today. Ajay's has taken a leap of faith and opened stores in Surat, Navsari, Valsad, Vapi, Daman, Silvasa, Ankleshwar, Bharuch, Anand and Vadodara.

The Solanki brothers aim to open 1000+ franchisee-owned stores by 2025 with one mission - Serving Good Quality Food at Affordable rates and accessible to all through their Franchise that empowers the youth to become entrepreneurs and generate employment and also profits.