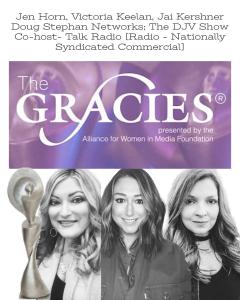 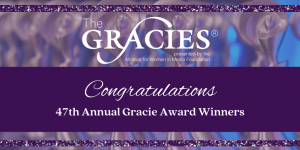 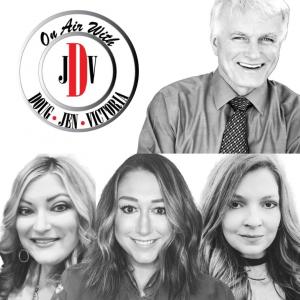 The DJV Show now has over 325 affiliates nationwide.

LOS ANGELES, CA, UNITED STATES, May 4, 2022 /EINPresswire.com/ -- The Alliance for Women in Media Foundation (AWMF) announced the winners of the 47th Annual Gracie Awards which will return in person on May 24, 2022, at the Beverly Wilshire Hotel in Los Angeles. This winners list includes none other than the acclaimed radio talk show, The DJV Show, hosted by Doug Stephan and Co-Hosts Jennifer Horn and Victoria Keelan, along with Jai Kershner presenting the What's Trending Report. The program was -----. The DJV Show now has over 325 affiliates nationwide.

Some of the most accomplished women in television, radio, and digital media will be honored during the event. The presentation will also honor 48 Hours, 60 Minutes, NBC Nightly News, The New York Times Presents, Pose, and Maid, as well as other entertainment and news programming that featured female-driven stories and culturally relevant subjects.

The DJV Show is customizable by daypart to fit any station’s needs. Stations can localize the show by including their own content at designated points throughout each hour. It can also be tailored to fit multiple formats including talk, adult contemporary, classic hits, hot AC, oldies, and more.

The Gracies honor the outstanding talent, such as The DJV Show, and content in radio, television, and digital media made by, for, and about women. Honorees are chosen from national, local, and student markets, as well as commercial and non-commercial entertainment and news outlets.

The "DJV Show" is a morning talk-radio program airing live Monday through Friday from 5 am until 9 am Eastern time, featuring a fast-paced format covering a variety of topics. The daily morning program provides listeners with pure fun and positive conversation to start their days. The DJV Show delivers passionate discussions on items affecting listeners the most in their daily lives. Hosts Doug Stephan, Jen Horn, Jai Kershner, and Victoria Keelan each bring a distinctive perspective to their highly entertaining conversations. Additional contributors round out each hour by providing listeners with news they can use on pop culture, entertainment, astrology, health, technology, pets, travel, finances, home improvement, and much more. These benchmark segments also offer an opportunity for stations to generate local revenue with sponsorships.

To view the complete list of award recipients and honorable mentions, visit www.allwomeninmedia.org.