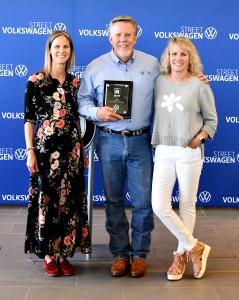 Street Volkswagen is one of fifty-six dealers in the country to receive the coveted Wolfsburg Crest Club Award. This award has been won by Street VW since 2015.

Street Volkswagen received their first Wolfsburg Crest Club Award in 2015 and has received the award consistently ever since. The Wolfsburg Crest Club Award is awarded to dealers for outstanding sales and service. Garnering this prestigious award means that Street Volkswagen of Amarillo has met the highest standards for customer satisfaction, parts sales, new vehicle sales, certified pre-owned sales, and service excellence.

“We are honored and humbled by this remarkable achievement,” said Street Volkswagen of Amarillo Owner & General Manager, John Luciano. “The award is great, but the reason we’ve won each year is because of the great talent we have working day after day at Street Volkswagen. This award wouldn’t be possible without the great staff we have in Amarillo, Texas.”

Joining the team in Amarillo, Texas and representing the Volkswagen brand was Jennifer Brown, Sales Operations Manager for Region 4F (New Mexico, West Texas and Oklahoma.) She presented the award to John and Kat Luciano during a quick presentation in front of employees, friends and community partners.

“Congratulations to Street Volkswagen for winning Volkswagen’s most prestigious award, the Wolfsburg Club award,” said Region Vice President, Sales, Central Region, Scott Bell. “It’s a remarkable accomplishment given to our top performers and they have won the award every year since 2015”.

Street Volkswagen of Amarillo opened in Amarillo, Texas in 2013 and has since been a valuable corporate citizen in the Texas Panhandle. They provide support to area nonprofit organizations such as Family Support Services, Young Life, United Way, the High Plains Food Bank, AAF-Amarillo, the Chamber of Commerce, the Hispanic Chamber of Commerce, West Texas A&M University and many other organizations. For more information on Street Volkswagen of Amarillo please visit their website at www.streetvw.com or call them at 806.350.8999