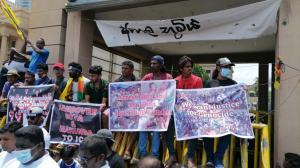 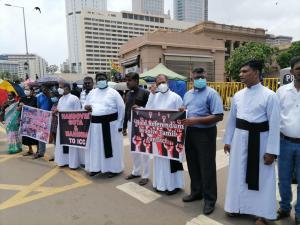 "Even though Tamils in the North and East of the country are not holding any protests; some Tamils in the Capital city Colombo joined the Galle face rally"

Even though Tamils in the North and East of the country are not holding any protests; some Tamils in the Capital city Colombo joined the Galle face rally, highlighting deep rooted Tamil grievances, like huge military presence in Tamil areas even after the war ended twelve years ago, Rape of Tamil women by Sri Lankan security forces, justice for tens of thousands of Tamils who were killed by the Sri Lankan Security forces amounting to war crimes, crimes against humanity and genocide & to bring permanent political solution to the protracted Tamil conflict by holding an internationally conducted and monitored Referendum.

Galle Face protesters were holding signs and shouting slogans like:

1) Arrest Gota for Killing Tamils.
2) Remove Military from Tamil Areas.
3) Refer Sri Lanka to the International Criminal Court (ICC) for Gota and other military & political leaders to face justice for war crimes, Crimes Against Humanity and Genocide committed against the Tamil People.
4) Hold an Internationally conducted and monitored Referendum to democratically find the wishes of the Tamil people to solve the protracted Tamil conflict.

Tamils in the island of Sri Lanka faced repeated mass killings in 1958, 1977, and 1983 and the mass killings in 2009 prompted UN Secretary General Ban Ki-moon to appoint a Panel of Experts to report on the scale of the killings.

According to UN internal review report on Sri Lanka, over 70 thousand Tamils were killed in six months in early 2009 and Tamil women were sexually assaulted and raped by the Sri Lankan Security forces. According to this UN report, the killings and other abuses that took place amount to war crimes and crimes against humanity. Independent experts believe that there are elements of these abuses that constitute an act of genocide.

International Truth and Justice Project (ITJP) in February 2017 handed over details to UN of Sri Lankan Military run "Rape Camps", where Tamil women are being held as “sex slaves”. Also, According to UK Foreign and Commonwealth Office report on April 2013, there are over 90 thousand Tamil war widows in Sri Lanka.

Thousands of Tamils disappeared, including babies and children. UN Working Group on Enforced Disappearances stated in 2020 that the second highest number of enforced disappearance cases in the world is from Sri Lanka.

Members of the Sri Lankan security forces are almost exclusively from the Sinhalese community and the victims are all from the Tamil community.