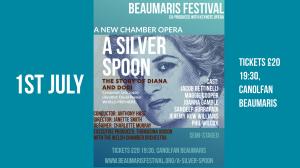 A Silver Spoon: the Story of Princess Diana and Dodi, with a Libretto by David Peimer, premieres at the Beaumaris Festival 1st July 2022

CAMBRIDGE, CAMBRIDGESHIRE, UNITED KINGDOM, May 24, 2022 /EINPresswire.com/ -- A Silver Spoon is a new chamber opera by the talented emerging Anglo-Welsh composer Lisa Logan and David Peimer (librettist). It is the first opera to look at the love story of Princess Diana and Dodi Al Fayed. It follows the story of two criminals and their plan to steal Princess Diana’s jewellery from a forthcoming Royal exhibition.
Scene 12 – Diana letter aria, gift to Dodi

‘A Silver Spoon: the story of Princess Diana and Dodi’, is a chamber opera exploring love and inter-faith relationships, modern royalty and being born with or without privilege. It will be performed in a semi-staging. You are welcome to the press night 1st July 7.30pm at the Beaumaris Festival, Beaumaris Leisure Centre, Rating Row, Beaumaris, Anglesey LL58 8AL.Composer Lisa Logan will discuss the creation of the opera with Rhiannon Mathias at 18:30, in a pre-show talk at Beaumaris Leisure Centre.

Brief information about the composer: Lisa Logan, www.lisalogan.co.uk, is an emerging composer, her first opera A Silver Spoon: the love story of Princess Diana and Dodi will be a premiere. She is currently workshopping her second opera Bronte, composed during lockdown, based upon an acclaimed play by leading female playwright Polly Teale. Bronte, the opera has recently been given support from Britten Pears Arts via its composer residency scheme and an Arts Council of England DYCP award. Her quintet Unrequited Love was performed and recorded by the Lontano Ensemble (cond: Odaline de la Martinez.) Her children’s piece The Magical Fish for narrator/orchestra illustrated by Rosie Brooks is premiering in June as part of the Jubilee celebrations with Docklands Sinfonia. Masters in Composition at King’s College, London. Her composition teachers include: Michael Csanyi-Wills, Dominic Sewell (Trinity Laban), Enrica Sciandrone (RCM) and Ed Nesbitt and Silvina Milstein (KCL). She was a choral scholar at Caius College, Cambridge, and was subsequently taught singing by Sally Burgess.


About the Beaumaris Festival: Celebrating its 37th anniversary, established in 1986, it is held annually in Anglesey, North Wales. The festival and its Artistic Director Anthony Hose has a long track record of giving premiere performances of new work, with composers-in residence, reaching back to the 1980’s alongside a policy of juxtaposing young performers with experienced ones. This is the festival’s first new opera. www.beaumarisfestival.org/

“UNDER PRESSURE: New Works by…

MEET Connects with Hundreds of…

On a Mission for “One…