Latest News
Home /Blog/Sheikh Bentounes: “we need to choose between the love of the power, or the power of love” 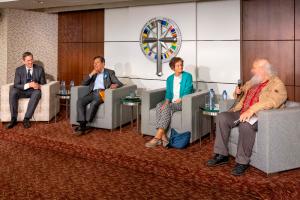 Debate "All of Us" at the Church of Scientology in Brussels

In Brussels, the Church of Scientology celebrates the UN day of Living Together in Peace

[Peace] I have no choice other than hope, and to work hard for it to happen”
— Eric Roux

BRUSSELS, BELGIUM, May 19, 2022 /EINPresswire.com/ -- On May 17, in the Church of Scientology based in Brussels, Boulevard Waterloo, people from many faiths gathered for a celebration: the 5th edition of the UN international day of Living Together in Peace (May 16). The beautiful chapel in the building was packed, when they projected the documentary film “All of Us” by Belgian director Pierre Pirard.

The film, just released these days all over the world to mark the International Day of Living Together in Peace, tells stories of audacious citizens who, with a strong desire for people of different beliefs to live together in harmony, have found ways of reinventing family, education, social relations, culture, and work... and have done so despite existing difficulties and frictions. The film gives faith into the future, in a world where “future” is a word that can bring its share of uncertainty and anxiety.

After the projection, a debate took place in the chapel, with four guests:

One was Sheikh Bentounes, spiritual guide of the of the Sufi Brotherhood Alāwiyya, who appears to be the very initiator of the International Day of Living Together in Peace, unanimously adopted by the 193 member states of the United Nations in 2017. For more than 40 years, Sheikh Bentounes has been travelling the world to promote interreligious dialogue, gender equality, environmental protection and peace.

With him was Eric Roux, Vice-President of the European Office of the Church of Scientology for Public Affairs and Human Rights, who is also a well-known human rights activist and deeply engaged in inter-religious bridge-building.

Third was Dr. Chantal Van Der Plancke, a renowned catholic theologian and teacher, and fourth was Robert Hostetter, who is maybe the most well-known protestant pastor of Belgium, having been responsible for 46 years of the Protestant radio and television broadcasts of the RTBF.

The four of them conducted a lively discussion, raising all the issues that the current times have brought to existence: the war, famines, global warming, etc., and finally agreeing that education to diversity, love and peace was a key factor if we wanted to have a chance to have a future to give to our children.

Sheikh Bentounes concluded by stating that “today, we need to choose between the love of the power, or the power of love.” When asked if hope was still possible, Eric Roux answered that as the aims of Scientology, as stated by its founder L. Ron Hubbard, was “a civilization without insanity, without criminals and without war; where the world can prosper and honest beings can have rights, and where man is free to rise to greater heights”, he had no choice other than hope, and to work hard for it to happen.

Pastor Hostetter concluded by saying that more than talking together, the most important should be to “do together”. The whole audience endorsed the idea, agreements were made to share projects in the future, including the creation of a Garden of Peace in Brussels, and Chantal Van Der Plancke uttered the final word: “today, we have done something together.”