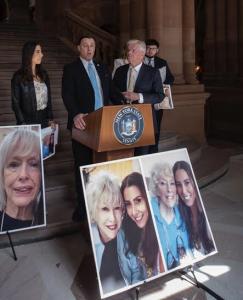 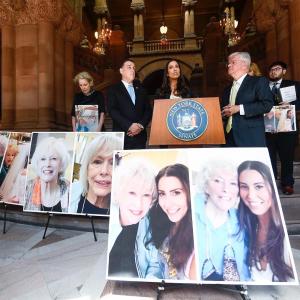 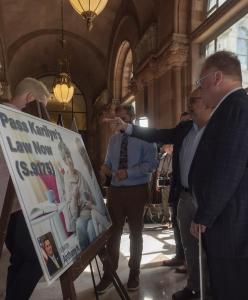 This bill will put an end to a loophole that has allowed malicious guardians unquestioned authority to deprive individuals of simple visitations with loved ones over personal differences.”
— Assemblyman Fred W. Thiele

NEW YORK, NY, UNITED STATES OF AMERICA, May 24, 2022 /EINPresswire.com/ -- Senator Anthony Palumbo (R,C-New Suffolk) and Assemblyman Fred Thiele (I-Sag Harbor) yesterday hosted a press conference calling for the passage of Karilyn’s Law. The legislation is named after Karilyn Montanti, a senior and victim of the guardianship system, whose loved ones have been denied due process rights to be heard and the right to an evidentiary hearing, which would simply allow family and friends to visit.

The lawmakers were joined by Christine Montanti, daughter of Karilyn Montanti, and guardianship reform advocates from around the state.

Karilyn’s Law prevents a guardian, care manager, or power of attorney from arbitrarily terminating visitation rights and isolating vulnerable individuals who are being held in involuntary guardianship.

This new legislation provides for the ward or family members, who have been denied their due process rights, to be heard and to have an evidentiary hearing before the court within 10 days of bringing an application.

“Throughout the pandemic we saw the pain and anguish of individuals who were unable to visit family members in hospitals and nursing homes. This pain is felt everyday by countless New Yorkers who are blocked from seeing their aging relatives due to the state’s current guardianship law,” said Senator Palumbo. “Karilyn’s law is new legislation that would right a wrong and provide families and friends with greater opportunity to visit loved ones who are under guardianship.”

“Far too many people have been taken advantage of and suffered greatly due to abuse under conservatorships," said Assemblymember Thiele. "This bill will put an end to a loophole that has allowed malicious guardians unquestioned authority to deprive individuals of simple visitations with loved ones over personal differences, as in the case of Karilyn Montanti. I call upon my colleagues in the Legislature to hear the stories of those victimized and isolated under conservatorships and ensure that families are given appropriate due process rights.”

“Guardianship abuse has existed for more than half a century and is currently a national epidemic,” said Christine Montanti, daughter of Karilyn Montanti and advocate for guardianship reform. “My mother was blocked and denied access to her entire family, friends and only grandchild without having an evidentiary hearing, without due process, or allowing her to attend a hearing.  She was never given notice of any hearings that were being held. Individual’s rights are being taken away with little to no recourse. Prisoners seemingly have more rights to appear before the court than my mother does today.”

“I am grateful that Senator Palumbo and Assemblymember Thiele are sponsoring this legislation on guardianship reform in the New York State Legislature to safeguard New York State’s most vulnerable individuals and to prevent others who are similarly situated from having to go through this horrific ordeal that my mother has been facing over the past 4 years.”

An article in the New Yorker in 2017 revealed an estimated 1.3 million elders in the United States are under the care of guardians who control about $273 billion in assets.