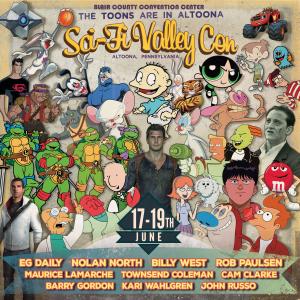 Cartoons of the voice actors appearing at Sci-Fi Valley Con 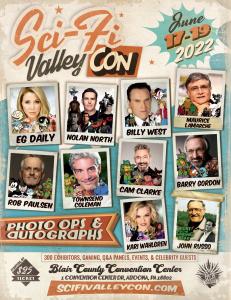 Sci-Fi Valley Con is hosting a huge voice actors reunion this June 17-19 in Altoona, PA. They have over 350 years of collective experience and 3,000+ credits.

This year the show has legendary voice actors and actresses who have been in the cartoon and voice game industry for a collective experience of 350 years and over a total of 3,000 credits.

A few of these legendary voice performers are E.G. Daily, who is most notable for her role as Tommy Pickles in the Rugrats series, Buttercup from The Powerpuff Girls, and many other live-action roles including Dottie in Pee-Wee's Big Adventure, Leslie in Friends, and Candy in The Devil's Rejects.

She’s followed up by the likes of Nolan North who is widely popular for this role as Nathan Drake in the Uncharted video game series along with the voice of Desmond Miles in the Assassin's Creed video game franchise.

Other notable guests include Rob Paulsen and Maurice LaMarche, who voice Pinky and the Brain in the cartoon show with the same name, as well as characters in the Animaniacs cartoon show and a plethora of other animated series such as Jimmy Neutron and Futurama.

Futurama lead star Billy West, the voice of the main protagonist Philip J. Fry, as well as other main characters such as Professor Farnsworth, Doctor Zoidberg, and Zapp Brannigan, will be in attendance all three days.

Rob Paulsen will also be appearing alongside his fellow castmates from the 1987’s Teenage Mutant Ninja Turtles cartoon series that launched a billion-dollar Ninja Turtles franchise that would span for decades and grow in popularity. They include Cam Clarke, Townsend Coleman, and Barry Gordon, best known as the voices behind Leonardo, Raphael, Donatello, and Michelangelo.

Lastly, Kari Wahlgren has joined the guest roster and is widely known as the voice of Jessica in the extremely popular show ‘Rick and Morty’ featured on Adult Swim and Cartoon Network, in addition to a long list of many other cartoon and anime shows.

For the complete list of events happening at Sci-Fi Valley Con on June 17-19, visit their site and review the complete event program for the schedule of panels and events, as well as pricing for autographs, photo ops, and voice recordings for all the celebrity guest talent.

Tickets are on sale now at scifivalleycon.com/tickets at a reduced price, tickets sold at the door will cost $5 more.