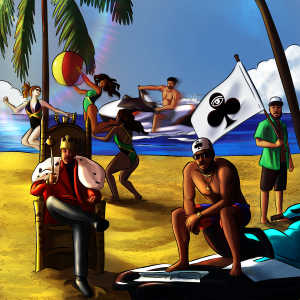 The specialist of mixed genre music and Brooklyn-native artist, Lono Bristol, is ready to take things to the next level this year.

UNITED STATES, May 9, 2022 /EINPresswire.com/ -- Lono Bristol is a Brooklyn-based Music Artist. This May, he is gearing up for releasing his latest single, 'No Religion' ft. reggae legend Beenie Man. Lono Bristol creates his music and has previously recorded albums. He is also the founder of Sov Music Group, an entertainment agency based out of Brooklyn, NY, built with the idea based on Sovereignty.

Many Millennial and Generation Z American singers like fusion music. America is a melting hotpot of various cultures, nationalities, and people from all walks of life. It has allowed the Music Industry to change constantly. This new collaboration of Lono Bristol with Beenie Man has allowed for a mix of Jamaican-American music. Lono likes to mix and match, creating new genres of music. He brings the much-needed creativity to the otherwise monotonous music being produced lately. The song's central theme is about love, and Lono has always believed that love is unbounded by laws and constraints. Love is just something that is nourished through time to reach its full potential. Lono's perspective on a limitless love song is No Religion for Love. Love knows no boundaries; religion, race, ethnicity, or cast is at the core of this song. Lono Bristol's Manager Apollo Rome shared his views on the song, 'I think this song showcases Lono's talent & creates a unique summer vibe.'

Lono Bristol's music journey is inspiring for all who share a feverish passion for music.
Born and raised in Flatbush, Brooklyn, Lono began learning to play the piano at the age of 13 and generate beats at 14. After a year of attempting to balance the two, Lono started to write and record his music while studying engineering at The City College of New York. After a few years of trying to balance his college career and love for music, Lono decided to focus on pursuing his obsession with music.
Soon after, Lono's sound began to influence the Brooklyn hip-hop movement. Lono produced tracks for the Brooklyn rap trio "The Underachievers" on their first mixtape Indigoism under the identity "Mr. Bristol," marking the first important milestone in Lono's artistic path.