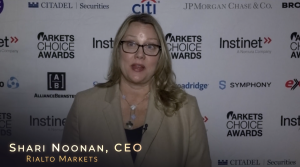 Rialto Markets’ CEO and Co-founder Shari Noonan was presented with the prestigious Instinet Positive Change Visionary Award at the 2022 Markets Choice Awards.
One of just three Positive Change premium titles at the New York event, Noonan was quick to share the award across Rialto Markets, a progressive broker-dealer, which has just passed the $1 billion mark with its crowdfunding contracts pipeline and operates its own secondary market ATS (alternative trading system).

“It’s a huge honor for me, but also one for my co-founders and the rest of a talented team sharing our vision that growing digitization of private markets will lead to previously unavailable opportunities in secondary trading,” said Shari Noonan.

“I am especially humbled when I see the names of previous Markets Choice Award winners,” she added, which have included Wall Street luminaries such as Bill Brodsky, Dan Royal, Jennifer Nayar, Larry Thompson, and Thomas Peterffy.

“But I’m also extremely proud that my particular award is associated with Instinet Co-Founder Jerome Pustilnik – a true believer in electronic trading.”

Noonan has more than 20 years of experience in electronic trading within the financial services industry, much of it on Wall Street where she built and scaled operations and product development with Deutsche Bank, Goldman Sachs, and Instinet and was instrume
ntal in the electronification of equities in the public markets.

“I’m now doing the same for private securities with our secondary market ATS,” she said.

“My time on Wall Street with Rialto Markets Co-founders Joel Steinmetz and Rob Noonan highlighted difficulties faced by high growth private company issuers and investors in the private securities market – the JOBS Act then offered the chance to address these.

“We had also made excellent contacts with like-minded and fantastically talented people, who shared our vision and were willing to leave high level jobs on Wall Street and get on board with Rialto Markets, a start-up where we leveraged that comprehensive and collective experience to bring mass efficiency to inefficient private markets.
“We chose the name Rialto Markets, because the Rialto Bridge was the financial hub at the rise of the medieval Venice city state – we’d like to think our company will make that mark in the post-JOBS Act era,” she said.

Noonan said that Rialto Markets has advised and supported many talented and ground-breaking companies who have conducted highly successful crowdfunding raises.
“In the same week as the awards, the electric vehicle company ATLIS motor vehicles revealed that it would seek to go public in the summer – we helped ATLIS raise $30 million in crowdfunding,” she revealed.

“We also advised the Digital Twin pioneer, Cityzenith, on its crowdfunding path as it seeks to use its futuristic tech to help real estate owners and even whole cities cut their carbon emissions and running costs dramatically.

“And we are currently raising some $250m through crowdfunding and other opportunities for 23 companies and have a billion-dollar contracts pipeline.”
Rialto Markets has also built one of the first secondary market ATS platforms to enable share dealing in a burgeoning private securities market, which Forbes says will hit a record $7 trillion this year and grow to a staggering $30 trillion by 2030.

“An important feature of our ATS is that all investors can access it directly without going through a broker intermediary, further reducing friction and costs for the investor,” said Noonan.