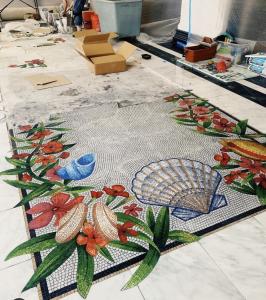 • The design includes a pink and red oleander garland, accented with classic native Texas Gulf shells that surround a gold “Queen of the Gulf” banner with a nod to the 1911 founding of the hotel. 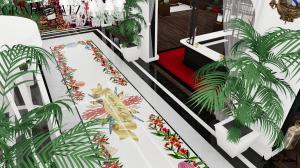 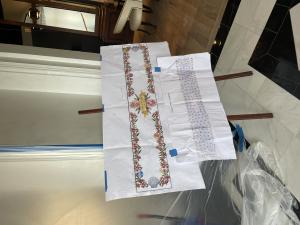 The mosaic design pattern was printed out full-size and divided into numbered sections (like a sophisticated puzzle) so that an individual could lift one pattern segment at a time with the tiles attached.

We wanted to create a spectacular entrance and pay homage to our ‘Queen of the Gulf’. The Grand Galvez setting inspired us with brilliant colors and natural Texas elements in an exquisite design.”
— Mark Wyant, owner, Grand Galvez

NEW “QUEEN OF THE GULF” MOSAIC WELCOMES ALL TO GRAND GALVEZ

GALVESTON, TX (May 16, 2022)- Grand Galvez has announced that installation of the custom designed 44-feet long by 7-feet tall Italian mosaic has begun in the entryway of the resort hotel property.

Heralding the hotel’s moniker as “Queen of the Gulf”, the Murano glass mosaic was designed by Grand Galvez owner Mark Wyant and his interior designer wife, Lorenda Wyant, produced by Dallas-based mosaicist Julie Richey and is being installed by Ms. Richey and Romeo de Candido of Miami. The installation, which began on May 9, is over 50% completed. The complete process should take approximately 7 to 10 days. (See timeline video and images of installation in Dropbox.)

- The design includes a pink and red oleander garland, accented with classic native Texas Gulf shells that surround a gold “Queen of the Gulf” banner with a nod to the 1911 founding of the hotel.
- The design drawing was sent to Pordenone, a town north of Venice, Italy in the Friuli region, where a family of artisans assembled tens of thousands of Murano glass tiles in close to 200 hundred colors, specific to the banner design.
- For example, the large scallop shells on either end have 11 colors of blue to project a three-dimensional look.
- The imperial red colors were the most difficult and costly to make.
- A special feature of the mosaic is the “andamento,” or path that the marble tesserae take when filling the space between flowers, leaves and shells. Visitors will note the background’s sinuous lines, as it curves around the features.
- “Elegant andamento will make a mosaic sing,” said Julie Richey, mosaicist. “The Italians are masters of this technique.”
- An image of the entire mosaic map is in the Dropbox at the end of this release.
- The pattern was then printed out full-size and divided into numbered sections (like a sophisticated puzzle) so that an individual could lift one pattern segment at a time with the tiles attached. (Images of the production are in the Dropbox at the end of this release.)
- At the studio in Italy, the tiles are laid face-down on a reverse printed paper pattern using a special water-based glue.
- The numbered pattern pieces were separated and stacked in a container for shipping to Houston and onto Galveston.
- Upon arrival at the hotel, the sectioned design is laid down in the designated, pre-pared floor area just inside the Grand Galvez revolving front doors.
- The installers carefully match the numbered pieces, carefully adhering each section to the cement floor.
- Quotes:
- Mark Wyant: “Grand Galvez is a magnificent, iconic building. We wanted to create a spectacular entrance inside the front doors and the goal was to pay homage to our ‘Queen of the Gulf’ in a majestic way. The Grand Galvez setting, which faces the Texas Gulf, inspired us to incorporate brilliant colors and natural Texas elements in an exquisite design.”
- Julie Richey, mosaicist:”It’s a mosaic brocade carpet of Texas oleanders and Gulf Coast seashells. We used marble and smalti, a kiln-fired enamel glass infused with rich colors. Thick sheets of glass are then cut using the exact same tools the Romans used. This is an artistic project that can be compared to couture stitching.”

The Grand Galvez, a 220-room resort hotel and spa, is a historic landmark property in Galveston, TX. Grand Galvez will be part of the Marriott Autograph Collection and has welcomed guests worldwide for more than 100 years. The AAA 4-Diamond property is the only historic beachfront hotel on the Texas Gulf Coast and is renowned as one of the finest Galveston hotels. Hotelier Mark Wyant, owner Seawall Hospitality LLC, purchased the property from the heirs of Galveston Island-born oilman and developer George P. Mitchell in March 2021. Mr. Wyant, along with his wife, Lorenda Wyant, has instituted extensive renovations, which will embody the hotel’s beautiful architectural design while, at the same time, introducing an upgraded luxury and energy.

A native of Dallas, Texas, Mr. Wyant is an established hotel owner and developer in Texas, Florida, Louisiana and South Carolina. The purchase of the Hotel Galvez, now the Grand Galvez, will mark the third property Mr. Wyant has developed in Galveston. In 1999, he built the Holiday Inn Express at 1st and Seawall and then sold it in 2005. He developed the Holiday Inn Sunspree Resort in 2004, where the noted Capt. Jack’s once stood. In 2014, he sold it and created The Saint Hotel brand with award-winning properties in New Orleans, Key West and Charleston. In 2021, he sold The Saint Hotel New Orleans and The Saint Hotel Charleston. Mr. Wyant continues to own and operate The Saint Hotel Key West, a Marriott Autograph Collection property.

A history lover, Mr. Wyant strategically selects development properties that are in key US cities known for their history and excellent leisure, business and entertainment experiences. His primary goal is to embody and respect the city's legacy, charm, and history in every location.

Akash and Trapperx Team Up…

NFT Launch Based on RAD’s…