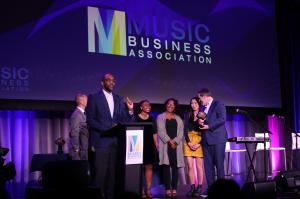 I am proud to be a part of laying the groundwork for a more representative music industry that embraces a wide variety of perspectives in leadership roles.”
— Tony D. Alexander, Co-Founder, President, and Managing Director of MIME
MEMPHIS, TN, UNITED STATES, May 12, 2022 /EINPresswire.com/ -- Made in Memphis Entertainment (MIME), a full-service entertainment group that includes 4U Recording, Beatroot Music, Heavy Hitters Music, and MIME Publishing, is proud to be named the inaugural winner of the Agent of Change Award at the first-ever Bizzy Awards on May 11th. The ceremony was part of the annual Music Biz 2022 conference Awards Dinner, hosted by Country star Jimmie Allen at the JW Marriott Nashville.

Introduced this year as part of the Music Business Association’s (Music Biz) first in-person conference since 2019, the Bizzy Awards celebrate Music Biz member companies and executives who are advancing commerce in the music industry and working tirelessly to make it a better place to work. Nominees were crowd-sourced for the first time ever, giving Music Biz members the chance to honor their peer companies and professionals.

“Since MIME’s formation, our priority has always been to hire and develop a diverse staff and to offer opportunities to those without a traditional resume,” said Tony D. Alexander, co-founder, President, and Managing Director of MIME. “As we continue to hire employees from traditionally underrepresented groups and watch them grow into leadership roles both at MIME and elsewhere in the music industry, I am proud to be a part of laying the groundwork for a more representative music industry that embraces a wide variety of perspectives in leadership roles.”

“In addition to the legacy we are creating at MIME, I am incredibly proud of the ways in which we support the local communities in Memphis, Atlanta, and Los Angeles,” said David Porter, co-founder and CEO of MIME. “Whether supporting organizations like Reaching Youth Through Music Opportunities (RYTMO), providing scholarships for diverse candidates pursuing music industry careers, or mentoring future music executives, we are helping to build the next generation of the industry in a more diverse way that will create ripple effects in the years to come.”

About Made in Memphis Entertainment (MIME)
Made in Memphis Entertainment (MIME) is a Black-owned full-service entertainment group with global reach, but with its heart in the hometown of modern American music. Founded in 2015 by original Stax Records songwriter/producer and Songwriters Hall of Fame inductee David Porter (CEO) and 20+ year business and legal veteran Tony D. Alexander (President and Managing Director), MIME is dedicated to re-establishing Memphis as a key music industry hub while expanding its influence around the world, all while developing and promoting diverse talent on both the creative and business sides of the industry.

MIME’s family of companies includes MIME Publishing, an independent music publishing company that handles Porter’s legendary post-Stax songwriting catalog and other copyrights of some of the most sought-after young producers in hip-hop and R&B; Heavy Hitters Music, a film, TV, and ad sync company with an all-female creative team and Emmy-winning music catalog; Beatroot Music, a leading independent music distributor, as well as its subsidiary Beatroot Africa; and 4U Recording, a state-of the-art recording studio brand with locations in Memphis and Atlanta. For more information, visit www.mimecorp.com.