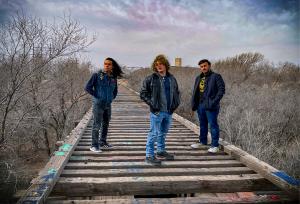 LOS ANGELES, CALIFORNIA, UNITED STATES, May 13, 2022 /EINPresswire.com/ -- With many achievements and commendations from music critics under their belt, it is unbelievable that Kenton Place just started its musical journey a few years ago. This Space City product emerged in 2018, playing the largest stages - co-headlining White Oak Music Hall, and performing in SXSW Creative Industries Expo, just to name a few. In 2019, they made a splash in the streaming scene with their debut, "Pride Never Lasts," receiving air time on 94.5 The Buzz and stayed on-air as the Texas buzz feature for over a month. Now, Kenton Place is back with the remixed and remastered "Pride Never Lasts," which is seen featured in their March five-song EP, "Terminal."

Kenton Place never fails to showcase its confidence and emotions while never losing sight of the raw passion they are known for. And with the EP release, they continue to grow the fanbase and only go to prove further that they are rapidly emerging to the forefront as one of the brightest lights in the music scene.

"Pride Never Lasts" is now available for streaming everywhere, including Spotify. Check out their upcoming live shows on May 29 at Acadia Bar & Grill in Cypress Creek Pkwy in Houston and on June 23 with Canadian alternative rock band 13 Friday's. For more information about Kenton Place and their next performances, visit their website and Instagram.

About Kenton Place
Kenton Place produces music rich in storytelling, packed with emotion and unforgettable vocals. The band features childhood friends vocalist/guitarist Logan Smalley (Smalls), drummer Noe Hernandez (Fez), lead guitarist Roque Techera (Rock, the hero), and bass guitarist Curtis Bird (Mr. Bird). Their signature band identity is unmatched by poetic and emotional lyrics with melodic and creative hard rock influences. Together all members decided on the name Kenton Place to pay tribute to the place that provided them with so many childhood memories and honor their roots.