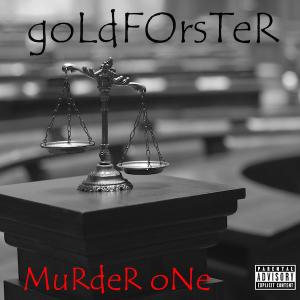 LONDON, UK, May 18, 2022 /EINPresswire.com/ -- This press release is to serve as the official announcement by Jude Goldforster on the release of the single titled “MuRdeR oNE”

[The SINGLE is available on all Streaming Services]

“MuRdeR oNE” is the latest release from the dynamic producer and rapper Jude Goldforster. The SINGLE takes on various tones ranging from aggressive to mellow but still creates an ambiance that is captivating and layered with mesmerizing melodies and profound lyrics. It’s a song with stories of pain and hurt but ultimately and above all it is an anthem that will provoke thought and empower minds. Jude Goldforster draws from his experiences and seeks to express those feeling through music. The narrative surrounding the rule of law and the justice system is at the core of the song as well as the reality of crime and its incursion into hip hop culture. However, listeners will find meaningful social commentary as well as a platform to which they can relate and vibe to. The single is filled with so much authenticity, it is emotional and majestic. This masterpiece is sure to enthrall the earbuds of Hip Hop lovers. Jude Goldforster is bringing more than just a good vibe, he is the voice of the voiceless who is bringing an exciting banger that will resonate deeply with people and echo in their minds for many nights to come. Play, Download and stream this game changer!

Jude Goldforster is a rapper and producer who is defined by raw talent and authenticity. The enigma is at the center of a new era in Hip Hop. He is carving out a brand new sound that will resonate deeply with audiences across the globe. Born and raised in North Yorkshire., Jude Goldforster seeks to tell stories with his music and move people.

Jude Goldforster is influenced by a wide variety of genres such as the Blues, R&B Pop, and Hip Hop as well as iconic producers and musicians such as Stevie Nicks, Alicia Keys, The Highway to Hell Rock group ACDC, BB. King and the Prince of Darkness Ozzy Osbourne. He sees music as a canvas on which to articulate his thoughts and create timeless works of art. He is an emerging artist who makes music that embodies his hopes and dreams. For talented musician, music is an art form that should be used to initiate change, like through green initiatives as well as standing up for human rights and justice. By using his gift he can fully express himself and deliver a musical experience that is both unique but also engaging, and relatable.

Having majored in Law in The UK and his experiences allowed him to witness various injustices as well as to grow and understand different cultures. His music is really about everyday life and expressing himself and influencing people to live their lives in a sustainable, socially conscious, and considerate way. Jude is also an extremely versatile musician who makes his own beats and is able to incorporate, integrate and accentuate his music across a plethora of styles. There is no doubt that Jude Goldforster will have a profound effect on the industry with his multifaceted approach to music.

Jude Goldforster will be dropping his latest project dubbed “MuRdeR oNE” which will connect with audiences on a deeper level and awaken their consciousness to the reality of unlawfulness and injustice. Jude Goldforster’s music combines various elements and his ability to switch up his flow makes him a one-of-a-kind artist. His music is filled with relatable topics that are grounded in reality and maintains a very real and authentic feel that is encapsulated by an edgy and trendy modern sound. Jude Goldforster is here to change the game!