John Krondes with Shirley Jones, and Marty Ingels in Hollywood. 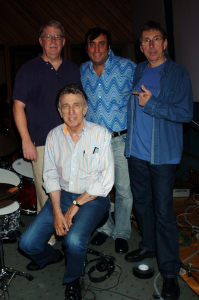 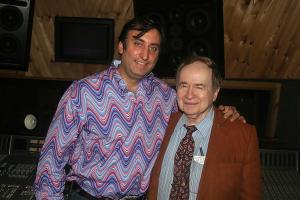 And when he does the songs, the most impressive thing about John's project is that he's sincere about getting to the heart of the matter...And John puts his heart into everything he does”
— Ray Walker of the Jordanaires
LOS ANGELES, CA, UNITED STATES, May 23, 2022 /EINPresswire.com/ -- ROCK 'N ROLL NEWS... "At The End Of A Rainbow You'll Find A Pot Of Gold. " Spookily, those beautiful and historic lyrical words sung by John Krondes and the Jordanaires, and their predecessors Earl Grant and Elvis Presley full circle are not only prophetic but ominous. Elvis Presley serenaded Priscilla Beaulieu with that famous love song called "THE END" on the night they met in Germany. Mystically, THE END was composed by John Krondes' father Jimmy Krondes and Sid Jacobson circa 1958. The linkage to THE END a/k/a "At The End Of A Rainbow" was written in the prophetic cards for both Elvis Presley and John Krondes before they were even born says Psychic To The Stars John Cohan. Cohan explained, "It was part of destiny's plan for Elvis Presley to choose to sing THE END to Priscilla on their first encounter. For the same fateful reason it was also destiny's calling for John Krondes to wind up recording THE END with the Jordanaires and to take on and carry through the Rock 'N Roll Mission of bringing forward another Chapter of the Memphis Sound. These events were supposed to happen, they were not coincidences." Psychic John Cohan has offered an even more philosophical reading as to John Krondes. He offers, "the John Krondes story is mind boggling. because it gets your mind thinking that there are deeper wonderful explanations to unknown things that are very real, and allows the human mind to absorb and comprehend them. It opens your mind to things that you never thought you would understand."

Psychic To The Stars John Cohan's explanations and reading into the unexplained "connections" and events which continue to surround and evidence the uniting of spirits and forces of Elvis Presley and John Krondes sound hauntingly similar to those justifications about the spirits scripted long before us all by Ancient Greek Philosopher Socrates. John Cohan and Socrates both argue the belief that the Soul and Spirit exists before birth, and continues to exist after death, and is said by them to be born again. Such deep ancient old teachings by Socrates helps give some sort of sense as to the mystical "connections" between John Krondes and Elvis Presley which is puzzling the world.

Socrates (470-399 BC) manifests "... we admitted that everything living is born of the dead. For if the soul existed before birth, and in coming to life and being born can be born only from death and dying, must she not after death continue to exist, since she has to be born again? "

Singer / songwriter John Krondes as of late has quickly risen to the title of "Hollywood's Mystery Man". John Krondes has the music and entertainment industry, media, and fans in all corners of the globe thunderstruck. No one can figure him out. Everyone is mystified at how John reeled in all of Elvis Presley’s musicians and singers, Joe Esposito, Arrangers, and Friends, that played with, worked, and knew the King. Industry experts, publishers, marketers, and you name it, are all scrambling to get on the Krondes music train. No one has seen anything like this in years and/or ever! John Krondes reportedly has close to 100 New Recordings with all of Elvis Presley's original players. He has them all; the TCB Band, American Sound Studio Band, DJ Fontana, Ronnie Tutt, Jordanaires, Stamps, Imperials, Sweet Inspirations, Elvis Horns, and others. John Krondes has herds of new believers flocking to his Instagram and Facebook pages, and Google News [ @johnkrondes ] waiting for another piece of Rock 'N Roll News and musical Instagram Reels to drop.

Ray Walker of the Jordanaires spoke to WVOX Radio, NY about John Krondes and said, "And when he does the songs, the most impressive thing about John's project is that he's sincere about getting to the heart of the matter...And John puts his heart into everything he does."

THE END by John Krondes and the Jordanaires is being prepared for a worldwide release by CDX Records , together with Sony Music and The Orchard.