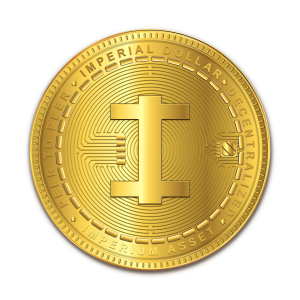 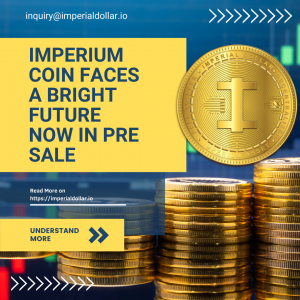 A Revolutionary Blockchain and Cryptocurrency

It is well enough that people of the nation do not understand our banking and monetary system, for if they did, I believe there would be a revolution before tomorrow morning.”
— Henry Ford, Sr.
1221 COLLEGE PARK DR SUITE 116, DE, UNITED STATES, May 25, 2022 /EINPresswire.com/ -- The imperial Dollar a.k.a IMPERIUM to be the first coin to enter SPACE by integrating the IMPERIUM blockchain into the StarLink satellite system. This will allow IMPERIUM to connect in areas where there is no connectivity, while its blockchain will provide extreme security, privacy, and stability through a hybrid AI technology.

BORN OF A NECESSITY
Ever since Bitcoin was introduced to the public in 2009 by the anonymous developer, or team of developers under the name of Satoshi Nakamoto and it became the world’s most appreciated cryptocurrency (an edict well deserved for the revolutionary breakthrough of a decentralized blockchain), thousands of following adversaries had tried, and continue to try to dethrone the reformer. After all, we live among human sharks who look at each other as fierce competitors, don’t we?

But, contrary to political correctness people are not the same. Some want to “kill” the competition, others to work with it. IMPERIUM is a blockchain that has been created to adopt and adapt (to) the latest technologies, itself being an innovator, permitting the integration of other blockchains while welcoming the collaboration of contributors as it ventures as an open source for the BENEFIT OF THE PEOPLE…
… of ALL the people, not only the 1%.

IMPERIUM created the Imperial Dollar, under the acronym ICO — Imperial Coin Offering — a browser-based, peer-to-peer, decentralized, private, and extremely highly-secured crypto” currency”. Well, they prefer to call it a crypto asset, being that it is stable. (Stable, not fixed. e.g., USTD or USDC are fixed). But, we will get to that in a minute. The most important thing is that the Imperial Dollar was designed to be “the cash of the people.”

Earlier this week, Fran Briggs, journalist, publicist, and public speaker, interviewed IMPERIUM’s founder Chris Douglas, and here’s what she has to say,
FB: You mention that your very dream was to help the people. Why?
CD: “Aren’t we the people maltreated (also) by the financial system? What do central banks give us for keeping our money in their “safe”; money that produces for them, not for us… What interest does a bank give us? 0.01% per year. $0.04 the most? Do you see the sarcasm and defiance in this? Let us take the crypto ecosystem and look at a one-year statistic, and see how much interest these coins offered, shall we?
BTC 289%; ETH 890%; ADA 2.736%; DOGECOIN up 11,900%

CD: “Do you still believe that people will want to keep their money in the bank once they learn about the true potential of crypto money?”
FB: “How about the risk of investing in crypto with all that volatility that it presents?”
CD: “Well, if with all that volatility we have the above interest advantage, imagine when you have a coin that is based on little to no volatility, like IMPERIUM is, what can do for the everyday citizen.
FB: Why is Imperium less volatile?
CD: IMPERIUM is projected to surpass the best expectations as it is proven by mathematical formulas — proof of validated arguments in the architectural protocol. IMPERIUM is to be powered by tangible goods, services, and smart contracts; not merely investors, some of whom may speculate and manipulate the market, using a “pump and dump method”.

We are talking about a coin that is well strapped into the verifiable, which will be proving its growth in geometrical proportions. And the beauty of it is that ALL the people own it; ALL people validate every transaction, which is the tenor of true democracy. (Whispering): Nothing to do with their political correctness — or their false and deceiving interpretation of democracy.”

As to the WHY question above, as surprising as it may sound, Douglas has already donated from his share about $6 million during IMPERIUM’s startup, before keeping a penny for himself. The same goes for Douglas’s friend and partner Brent Davies, who also donated a close equivalent to people in need.

CD: “We have allocated an amount of 10 billion ICOs, which is $100,000,000 today (considering our ICO is valued at $0.01 each) for donations to such places as orphanages, children’s hospitals, schools and universities, research for terminal maladies, green energy programs, space, etc,. When the ICO will reach $0.10 the among will be $1 Billion, and so on… And we are only starting…”

FB: Are there other projects that you want to integrate into the IMPERIUM blockchain?
CD: “ We have a Mortgage-Free Home Funding Program, designed to finance home purchases, where people will be able to buy their homes outright and, as the title says it, mortgage-free. All paid off. Now — THAT… is the American dream, not to pay all life ten times for the price of a house … Look how many foreclosures there is every year. Look at how the vampires (you know who you are!) are manipulating inflation having millions of people lose their homes.”
FB: Is it logistically possible to give away money in that measure? Can you prove this as fact?
CD: Mathematics is a factual science. I welcome anyone who can prove our formulas wrong. My experience in life tells me that the more you give the more you receive. This is also a fact. Let them argue with it. But you will come to us at the end of the day, to get a share of what is yours. Because IMPERIUM is yours. You own it. Claim it!

FB: What is the plan for success?
CD: To proclaim IMPERIUM and its Imperial Dollar (ICO) “THE CASH OF THE PEOPLE”. John McAfee said it before me… (by the way, what a brilliant mind he is)
Wink! "To offer to people financial advantages; instant, and quick and costless payment transfers; to pioneer reformed credit privileges (such as no-credit-check funding allowances for all); lend with ether-like interest, etc.
FB: What is next big project?
We are creating the world’s first crypto stock exchange programmed to unite and stabilize all existing crypto.