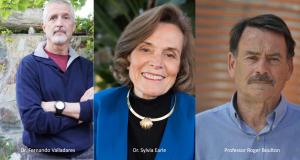 May 25, 2022 (Planet Earth) - Green Wine Future 2022 continued for a third day today (May 25, 2022) with even more exciting keynote addresses and sessions by notable personalities both inside and outside the wine business. Interprofesional del Vino de España (Spain) and Cave de Gan Jurançon (France) were the host organizations and regions for the third day. Wines of Chile, California Wines, Wines of South Africa, and Wines of Portugal hosted the previous two days.

Green Wine Future 2022 by Wineally is the sixth edition of a conference pioneered in 2006 under the name of the World Conference on Climate Change & Wine. This 2022 edition is being held virtually from eight world time zones, including host regions of Chile, California, South Africa, Portugal, Spain, Jurançon France, Barossa Australia, and New Zealand.

Day three of the conference began at 8:00am in the Central European time zone (CET), with a welcome by Susana García Dolla of Interprofesional del Vino de España, host of the morning session. Cave de Gan Jurançon hosted the afternoon sessions, with President François Ruhlmann and François Bayrou, the Mayor of the city of Pau, France welcoming attendees to the France section of the program.

Keynotes of the day included Fernando Valladares, Research Scientist at the Spanish Council for Scientific Research who began Day three with a lecture about the challenges of climate change. Jonathan Foley, Climate & Environmental Scientist and Executive Director of Project Drawdown, closed the morning sessions with a talk on reaching drawdown, a hopeful science-based approach to address the climate crisis.

The afternoon began with a keynote lecture by Roger Boulton, Emeritus Distinguished Professor of Enology and Chemical Engineering at University of California Davis talking about designing wineries to capture and sequester CO2. The day concluded with an address by Sylvia Earle, legendary Marine Biologist, Pioneer of Ocean Exploration who gave an outside perspective on why we must protect the oceans for the health of the wine business.

The sessions of the day included subjects such as:
• Wine Grapes in a Changing Climate
• International Sustainability Certification Programs: Why or Why Not?
• Packaging: Better, Easier, Cheaper
• The Economic and Social Impact of Renewable Power
• Turning Water into Wine Efficiently
• Winery’s Responsibility to its Community

It will also include sessions on:
• Navigating the Waters of Government Policies
• The Value of Organic and Biodynamic
• Emerging Regions and The Future of Wine
• What is Regenerative Viticulture?
• The Benefits of a Circular Economy

In addition, some late additions to the program will also take place, including testimonies and recordings with wine producers of the Okanagan and Napa Valley and a summary of the conference and a closing session where several of the speakers will return for a live discussion on what’s next for the wine business.

The event has the support of the OIV, California Wines, Wines of Chile, Barossa Australia, Thompson Okanagan Tourism Organization, Interprofesional del Vino de España, Viniportugal, Wines of South Africa and many of the world's leading wineries.

Go to http://www.greenwinefuture.com to register for day four and review previous day replays.