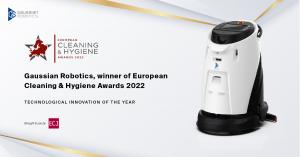 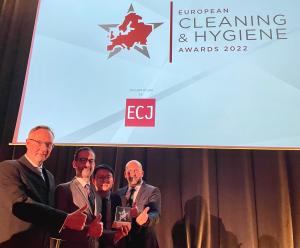 The award ceremony was hosted by ECJ (European Cleaning Journal) in Brussels on Thursday night (April 28). According to Michelle Marshall, Editor of ECJ, the event was “the most successful to date”, and the standard of entries this year far exceeded the judges' expectations.

The European Cleaning & Hygiene Awards are the only pan-European awards launched by ECJ and organized by EMG to recognize the professional cleaning sector and reward standards of excellence in all areas and at all levels. The jury of 2022 was comprised of international industry experts: Michelle Marshall, founder of the ECH Awards, Lynn Webster, Juan Díez de los Ríos de San Juan, and Frank Veneman.

Scrubber 50 Pro, the award winner of “Technological Innovation of the Year”, is the latest upgraded version of Gaussian’s autonomous floor cleaning bot model Scrubber 50. The robot features superior environmental perception with cutting-edge sensors and deep-learning-based algorithms and is claimed to be the first of its kind that realizes autonomous spot cleaning. Under the so-called “Auto Spot Cleaning” mode, the robot constantly scans the cleanliness of the nearby floor and automatically performs spot cleaning where wastes or stains are detected, while sending messages to operators when encountering wastes that are too large for it to clean. Cleaning only where it is needed, Scrubber 50 Pro is a true efficiency booster and highlights eco-friendliness by cutting down water and power consumption.

The European Cleaning & Hygiene Award is not the only honor that Gaussian Robotics has won this year. Earlier this year, the Interclean Innovation Award revealed its nominees for 2022, and Gaussian’s Scrubber 50 Pro was on the list. Scrubber 50 Pro outperforms its competitor by a large margin in terms of navigation capabilities and distinguishes itself with a “pragmatic minimalism” design concept that focuses predominantly on cleaning effect and robotics technologies — no gadget or accessory developed for entertainment.

Founded in 2013, Gaussian Robotics (Shanghai Gaussian Automation Technology Development Co., Ltd.) is one of the world’s earliest robotic companies engaged in the R&D of autonomous driving and navigation technology. 8 years after its foundation, Gaussian has developed and launched currently the world’s most comprehensive floor cleaning robot portfolio consisting of 6 product lines covering the functions of scrubbing, sweeping, vacuuming, dust mopping, sanitizing, and crystalizing. The GS cleaning robots have been deployed in thousands of commercial, institutional and industrial facilities across 43 countries and regions to deliver professional cleaning services.