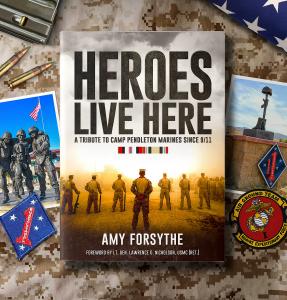 'Heroes Live Here: A Tribute to Camp Pendleton Marines Since 9/11' is filled with more than 150 full-color photos of memorials and markers placed aboard Marine Corps Base Camp Pendleton.

This is a love letter to Camp Pendleton and to all the Marines who ever served here. This book has been 20 years in the making and highlights how the community has rallied around our Marines.”
— Amy Forsythe, Author

The exhibit is based on her new book titled 'Heroes Live Here: A Tribute to Camp Pendleton Marines Since 9/11,' which chronicles the war memorials and tributes located within the sprawling military training facility in north San Diego county.

The exhibit will be on display and open to the public through June 14 and is located at 330 North Coast Highway in Oceanside, California.

Following her three deployments to Afghanistan and two combat tours in Iraq, Forsythe wanted to capture the tributes to the fallen and "put a human face on war." This exhibit provides an opportunity for our community to reflect on the 20 years in which many of the surrounding communities provided support to military members who were deployed at least once to Afghanistan and/or Iraq.

ABOUT THE AUTHOR:
Amy Forsythe is an award-winning multimedia journalist and military combat veteran with more than 30 years of experience in storytelling, communications and multimedia content creation. Amy deployed to Iraq and Afghanistan as a U.S. Marine Combat Correspondent and now continues to serve as a Public Affairs Officer in the U.S. Navy Reserve. Her imagery and articles have been published on Fox News Channel, CNN, MSNBC, ABC News, Newsweek Magazine, Soldier of Fortune Magazine, and many other news outlets.

Her new book, which has already reached the Amazon Kindle Best-Seller list in three categories, is filled with more than 150 color photos depicting the history of Camp Pendleton and tributes to U.S. Marines who served in Iraq and Afghanistan. Included are stories from a Navy Cross recipient, a Military Working Dog Handler and a combat artist who describes his role to paint and sketch Marines on the front lines of combat. The book is available on Amazon and Barnes and Noble. (ISBN: 978-1-7375957-1-7)
Learn more at www.heroeslivehere.com.