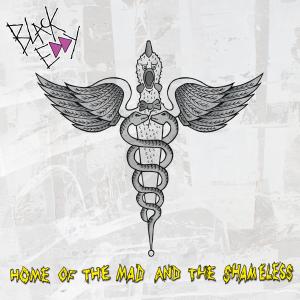 Home of The Mad and The Shameless

CAMBRIDGE, CAMBRIDGESHIRE, UNITED KINGDOM, May 13, 2022 /EINPresswire.com/ -- Blackpool 4-piece Black Eddy confront madness with glee in their mentally charged upcoming album Home of the Mad and the Shameless. Part exercise in emotional vulnerability, part self/social satire, all hard alt. rock fun, the 6-track, 34-minute album holds nothing back with its explosive and cathartic expression. Nowhere is this more evident than in the project’s lead single Repost.

From its opening crowd-rousing riff, the ode to internet addiction channels the energy of tumbling into a Web 2.0 Wonderland. The single lovingly satirises new-age pop culture with lyrics that are either memes or based on memes, all to a thrashy, punk-infused score. Repost revels in its criticism of internet culture with chants that challenge increasingly heated free speech debates, while also lovingly surrendering to it with a rally cry to storm Area 51 that is out of this world.

“With Repost we wanted to soundtrack the doom-scroll. It’s no secret that millions around the world struggle with internet and phone addiction (ourselves included). Like all the songs on the album, we wanted to tackle a real issue that we’re going through by making as much noise and having as much fun with it as we can!”

This subversion of mental health tropes is what defines the concept album. Stemming from real-world mental health struggles with schizophrenia, addiction, and memory loss, Black Eddy reflect on their battles in the only way they know how – with a smile.

The album’s accompanying literature extends the lore established by their legendary live shows that have made them staples of the Blackpool scene. Between rivalries and infatuations with other bands, facing off with a bouncy castle in a battle of the bands, and unforgettable Halloween parties, Black Eddy build a world in their gigs which is expanded upon here. With each member of the band held within a mental asylum by the shadowy CIA (Coop Insane Asylum), Black Eddy’s songs from Home of the Mad and the Shameless are calling cards to others who have struggled similarly but choose to reflect on it with a tongue in their cheek.

With rave reviews from their previous releases praising them for their ‘spirit and raison d’etre’, seamless flow between grunge, alt. rock and punk, and undeniable musical talent, Black Eddy are perfect cult hero material that are all but primed to take the mainstage too.

For anyone who revels in the examinations of fringe, playful dark humour, or just bloody good rock, Black Eddy and their album Home of the Mad and the Shameless are a must listen.

Fans can look forward to listening to the album across all platforms 25/06/22.