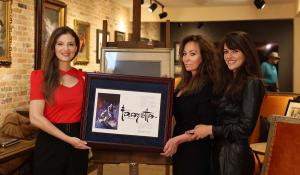 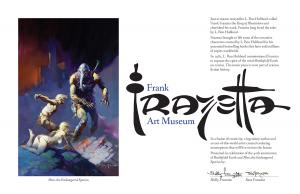 Certificate presented by the Frazetta Girls at the Frank Frazetta Museum in recognition of the 40th anniversary of Battlefield Earth.

In a fusion of creativity, a legendary author and an out-of-this-world artist created enduring masterpieces that will live on into the future.”
— The Frazetta Girls (Holly and Sara)
HOLLYWOOD, CA, UNITED STATES, May 11, 2022 /EINPresswire.com/ -- Just as master storyteller L. Ron Hubbard called Frank Frazetta the King of Illustrators and cherished his work, Frazetta long loved the tales by L. Ron Hubbard.

So it was that in 1982, L. Ron Hubbard commissioned Frazetta to capture the spirit of the novel “Battlefield Earth” on canvas.

On the opening day of the Frank Frazetta Museum at his home in Boca Grande, FL, earlier this year, his daughter Holly Frazetta and granddaughter Sara Frazetta presented a framed letter of recognition honoring the 40th anniversary. “In a fusion of creativity, a legendary author and an out-of-this-world artist created enduring masterpieces that will live on into the future.”

Attendees of the grand opening also saw the pre-release of a never-before-shown 7-minute interview with the legendary artist titled “Advice from a Master: Frank Frazetta.”

Frazetta brought to life other evocative characters created by L. Ron Hubbard for his perennial bestselling books, including the Lieutenant for “Final Blackout” and the Countess Krak for MISSION EARTH. Many of his paintings also graced the covers of earlier Writers of the Future volumes, fitting as he was one of the Illustrator Contest’s first judges. A collection of fine art prints, numbered and signed by Frazetta, can be seen at The Frazetta Collection.

Frazetta wrote an article published in “L. Ron Hubbard Presents Writers of the Future Volume VII” titled “Frank Frazetta: An Introduction,” where he stated, “You know, in an essay that ran in Volume Two of this series, L. Ron Hubbard said ‘What is good art?… Technical expertise itself adequate to produce an emotional impact.’ And if you realize that this washes out a vast amount of what’s called ‘art,’ but isn’t art, and if you realize this places a tremendous obligation on the artist, that’s right. We all have our limitations … but every once in a while, guys like me reach out and go far beyond what we accepted up until then as great and wonderful. Like the four-minute mile. ‘Can’t be done, can’t be done,’ we said for years. Then somebody does it, and suddenly everybody feels they can do it.”