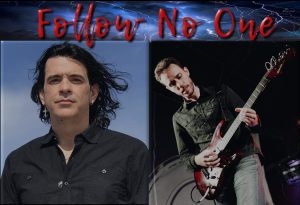 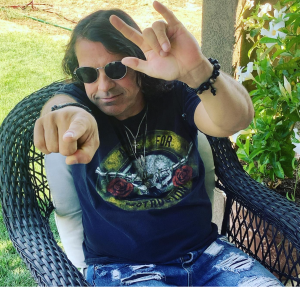 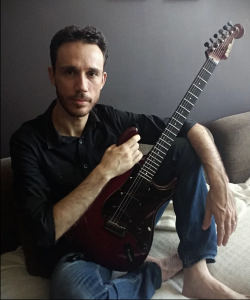 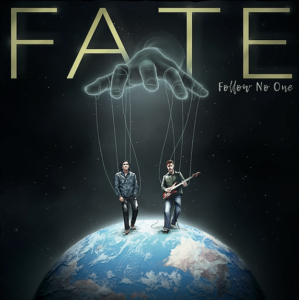 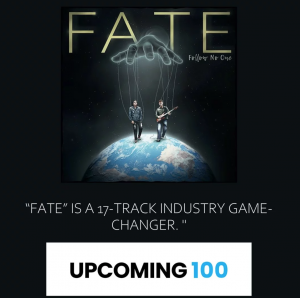 Was it fate all along, or something we created…Did we just screw things up?”
— Rich Hall, singer, songwriter, producer of Follow No One

DENVER, COLORADO, USA, May 24, 2022 /EINPresswire.com/ -- Calling All Rock Fans! The award-winning rock duo: Follow No One, breaks all industry norms with the release of “Fate,” a modern cinematic rock concept album that brings back the magic of Rock. Described as a cross between Queensryche and Styx on a hard rock foundation; Follow No One draws from the purest classic and raw hard rock sounds that defined an era, while adding their own unique twist on the genre.

Follow No One is not some rock throwback group. Instead, the artists have fused the greatest elements of rock’s past with the present and blended all into an authentic new take on rock that renders jaw-dropping guitar work and distinct vocal stylings. Follow No One is comprised of two industry leaders, Pedro Murino Almeida and Rich Hall. A Portuguese native, Almeida is a classically trained composer and guitar virtuoso who works in both film and video and found success in his musical acts. Lead singer Hall is an American-born singer- songwriter who initially made his mark in the theater at a young age, but discovered his powerful melodic vocals matched perfectly with rock.

The title track “Fate” takes listeners through the true-life story of Hall; husband, father, Army war veteran, and corporate executive, a man who appeared to have it all – jolted to his deathbed in an instant. “Fate” chronicles Hall’s journey and the music accompanies the listener through the drama and acts as a compass from track to track. Audio scenes and flashbacks added between the tracks further envelop listeners into the storyline and guide them along the way. Each track is stylistically and tempo-driven, employing myriad rock techniques, giving the album its edgy and unique feel.

Named the Best Rock Act at the Nashville-based JMA 2019 Awards; the world’s largest Indie Music Awards, Follow No One continues to pave their own lane, as their name suggests. This is evident in the newly released album, “Fate”, the cinematic hard rock concept album being called a "...17-track industry game-changer" - 'Upcoming 100'. The visuals for "Fate" are steadily gaining traction as the video is being aired by programmers across the country from the Music Network - OTT streaming on Roku and Apple TV to Video Hits TV as well as Germany on OKTV reaching millions via The Chubb Show TV. Hall also just dropped one of the most robust rock and interesting artist interviews with Nonstop Radio in Harlem and was also featured on the Hype Magazine https://www.thehypemagazine.com/2022/05/rock-duo-follow-no-one-brings-cinema-to-their-latest-rock-album-fate/?utm_source=The+Hype+Magazine.

Written, performed, and produced by the duo, “Fate” is a heavy rock album that transitions through melodic rock and concludes with a truly epic finale. The self-titled single “Fate” is a rhetorical song that prompts listeners to reflect upon their own lives. Hall poses a question; "Was it fate all along, or something we created…Did we just screw things up?"

Follow No One invites fans, both old and new, to travel with them through a musical journey, and also to join their mailing list for some free music and the inside scoop with many surprises along the trek before the album’s release in May. Follow No One provides an exciting and new brand of rock music, that will span the generations.

FATE is calling all rock fans. With this release, it is time to listen.