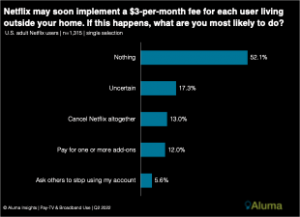 The more elegant the means of restricting password sharing, the less subscriber exodus is an issue.”
— Michael Greeson, founder of Aluma Insights

FORT COLLINS, COLORADO, UNITED STATES, May 4, 2022 /EINPresswire.com/ -- For 15 years, Netflix leadership considered password sharing as a de facto free trial that served to expand brand awareness and provide a healthy conduit of new subscribers. While this logic worked when Netflix was a fledging SVOD operator set on growing its domestic footprint, it became increasingly counterproductive as saturation closed in.

Today, Netflix has few options left to grow domestic revenue. It has already leaned into price increases, all the while rejecting calls to introduce a less-expensive ad-supported tier or implement a more assertive authentication regiment. Unfortunately, its longstanding tolerance—at times encouragement—of password sharing has created a permissive atmosphere in which 30% of its domestic users now borrow credentials from someone living elsewhere. Having shed 636,000 domestic subscribers in first-quarter 2022, the company is finally cracking down on ‘freeloading.’

But fears persist that implementing policies that restrict password sharing could cause a wave of cancellations. "Consumers have for years been told, both tacitly and explicitly, that sharing passwords with others outside the home was acceptable,” notes Michael Greeson, founder and principal analyst at Aluma. “To remove this 'privilege' at this time—when prices for fuel, food, and other necessities are skyrocketing—could indeed rub some loyal subscribers the wrong way."

However, the threat of significant losses, argues Greeson, is significantly less when the value of the service is sufficiently high and the means of restriction sufficiently elegant. "Netflix has high value relative to its competitors, and it appears focused on identifying solutions that limit password sharing and make sense to the account owner. The goal is to grow revenue, not dilute it."

One such solution now being tested in South America asks account owners to pay an extra $3 for each out-of-home user on their account. Otherwise, account borrowers are offered the chance to subscribe at full (in some cases a discounted) price. A similar program will be implemented domestically later this year or in early 2023. But would be the impact of such a policy?

Aluma research finds, if similar charges were introduced in the U.S., 13% of adult Netflix users would likely cancel service altogether, while 12% would likely add at least one $3/month out-of-home user. Based on 20 years of comparing proclivities with actualities, Greeson expects less than half of the 13% likely to cancel will actually do so. As well, he predicts at least 12% of account owners will add at least one out-of-home user who otherwise wouldn’t be monetized. “Adding $3/month to a father’s Netflix bill versus his daughter at college having to pay $15/month is quite compelling.”

Between April 10-17, 2022, Aluma surveyed more than 2,200 adult broadband users in the United States as to their use of residential broadband and home video services, of which 1,315 were Netflix users.

Aluma creates actionable intelligence on the home media consumer and the value chain that serves them. Via expansive syndicated consumer research and streetwise acumen, we deliver the most robust research subscription in our space, all for an unbeatable price. We invite you to rediscover what a cost-effective research program looks like.

For more information, contact
Aluma Insights using the link below
email us here