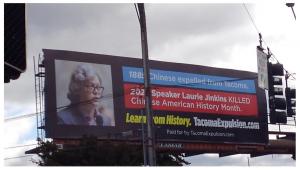 A Billboard in Tacoma, WA Urges Speaker Laurie Jinkins To Learn From the City’s Violent Past Against Chinese Americans.

This year, Senate quickly passed ESB 5264 by 48 to 0 in January. This would allow this bill enough time to navigate through the House. After the bill finally reached House floor calendar on February 26, House Democrat Leadership intentionally blocked this bill, having plenty of time and all the power to bring this bill out for an all member vote.

In her interview with The Spokesman-Review in April, House Speaker Jinkins told the reporter that "majority Democrats had questions about assigning months to ‘sub-ethnic’ groups.“ Just 3 years ago, in 2019, ALL House Democrats, Laurie Jinkins included, voted to pass SB 5864 and designate October as Filipino American History Month. House Democrats clearly had no "questions" about passing SB 5864 and designating a month for the Filipino "sub-ethnic" group, yet they now claim to have "questions" about assigning a month for Chinese Americans, the largest Asian ethnic group in Washington.

In a March 3rd text message exchange with Speaker Jinkins , Rep. My-Linh Thai asked, "Love to hear your take on the ‘politics’ of not passing this bill (i.e. ESB 5264, the Americans of Chinese descent history month bill) ." On March 4th, less than an hour after ESB 5264 missed cutoff and died, Rep. Cindy Ryu celebrated their victory with her legislative assistant and said in an email, "With the passage of this bill, they (i.e. the community organizations behind ESB 5264) would have been further emboldened." Rep. Ryu later dismissed the community organizations in another email exchange with her legislative assistant on March 9th, and said, "It’s a community of 200-300 people max. They’ve been taking up too much of certain legislators (seems females only so far) like Sen. Kuderer and Rep. Walen."

The power to pass ESB 5264 was firmly in the hands of House Speaker Laurie Jinkins of Tacoma. As Speaker of the House, she had the ultimate authority to determine if this bill received a vote, but she chose not to. Given Chinese Americans’ long history in this state, their large contributions, and their painful discriminated past, Washington State is long overdue for a Chinese American History Month.

The Chinese American community is holding Speaker Jinkins accountable. In 1885, Chinese immigrants were forcefully expelled from Tacoma. They lost their homes and possessions, and some even lost their lives along this terrible journey. The city later built Chinese Reconciliation Park to commemorate this dark history. Rep. Jinkins apparently did not learn from her city’s dark past. This billboard’s message is clear: "Those who forget their history are condemned to repeat it. (by George Santayana)"