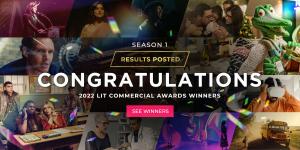 The 2022 LIT Commercial Awards is honored to unveil the formidable award victors of Season 1.

NEW YORK, NY, UNITED STATES, May 6, 2022 /EINPresswire.com/ -- The 2022 LIT Commercial Awards is honored to unveil the formidable award victors of the Season 1, recognizing the marvelous commercial productions created by adaptive crews and teams across the industry, whilst celebrating their remarkable creativity and innovation in producing the best of screening operations and videos, elevating the overall standards among the field.

In the past season, the award program is proud to have received the immense participation of over 25 nations across the globe, including United States, United Kingdom, Canada, Ireland, Austria, France, Netherlands, Belgium, Singapore, and many other countries. More than 180 entries were turned in by international production crews, signaling the ascendancy of the best there is.

“During this years’ competition, I am overwhelmed by the many awe-inspiring commercial productions in the 2022 LIT Commercial Awards, with so many entries teeming with creativity!” Exclaimed Thomas Brandt, the spokesperson of IAA. “I am truly honored to witness the elevation of commercialism, as the crews continue to thrive in creating messages that are memorable and everlasting, leaving behind a strong sensation of resonance.”

“With the 2022 LIT Commercial Awards being this exhilarating, I now have high expectations for the program moving into the next phase, as the need for commercials is constantly on the rise,” said Thomas. “Creativity and a structured mind is vital in creating the most interesting productions, which is why entrants are evolving to fulfil higher expectations in the fields of broadcast, non-broadcast, and commercials, and most importantly over the entire production industry.”

The LIT Commercial Awards recognizes, celebrates and honors novel excellence within the universal scale of international commercial video and television production, leading the way in the pavements of success and exposure to the global audience, producing the best commercial videos that will change the face of the industry.