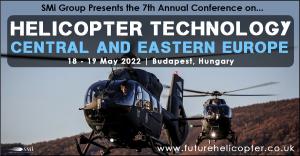 An interview has been released with Major General Walter T. Rugen who is set to speak at Helicopter Technology Central and Eastern Europe 2022

BUDAPEST, HUNGARY, April 22, 2022 /EINPresswire.com/ -- SMi Group’s Helicopter Technology Central and Eastern Europe 2022 conference is returning for its seventh successful year on the 18th and 19th May 2022 as a live and in person event in Budapest, Hungary.

Highlights at the Helicopter Technology Central and Eastern Europe Conference include:

• Keynote briefings from senior officers from Central and Eastern Europe
• A unique focus on multipurpose helicopter technology and joint force interoperability
• Briefings on: Rotary Procurement, Platform Upgrades and Modernisation, Interoperability, and National Defence Priorities and Capabilities
• Informal networking time so you can gather insight from peers and colleagues also shaping and influencing regional helicopter programmes today
• The opportunity to hear from and meet key industry experts as well as influential military representatives

Below is a short biography and insight into who Major General Walter T. Rugen is:

In 2005, MG Rugen was assigned as a strategic plans officer in the J5 at the United States Special Operations Command at MacDill Air Force Base, Florida.

In 2007, MG Rugen commanded 3rd Battalion, 160th Special Operation Aviation Regiment. From 2009-2011, MG Rugen was assigned to the Army Staff in the aviation directorate at the Pentagon.

From 2012-2014, he commanded the 2nd Combat Aviation Brigade in the Republic of Korea. He then transitioned back to the Pentagon where he became the Chief Army Aviation Force Development Division in the Army G8 from 2014- 2016.

From 2016-2017, he served as the Director of Materiel in HQDA G8 before serving as the 7th Infantry Division Deputy Commanding General - Support at Joint Base Lewis-McChord, Washington from 2017-2018.

Ahead of the conference, SMi Group caught up with Major General Walter T. Rugen to find out more about his role, priorities, current projects, opportunities, and his involvement as a speaker at the upcoming event.

What are the primary obstacles for your organisation in conducting effective helicopter operations, and how are you looking to overcome these?

“With our legacy systems (developed 40+ year ago) reaching the constraints of their growth margins in size, weight, power, cooling, speed and range we must look for clean sheet designs to provide us the ability to incorporate the capabilities we need to win in a future fight.”

Are there any technology or platform updates that have interested you in the past few years?

The full interview as well as the event brochure can be downloaded at www.futurehelicopter.co.uk/PR2

Major General Walter T. Rugen will also be presenting on 'Enhancing the Potential of Rotorcraft to Provide Greater Reach'. The presentation will cover: Progress on the Future Vertical Lift (FVL) programme, Establishing the priorities of Future Long-Range Assault Aircraft (FLRAA) in order to, maximise survivability and interoperability and The operational and strategic opportunities of the FVL programme.

About SMi Group:
Established since 1993, the SMi Group is a global event-production company that specializes in Business-to-Business Conferences, Workshops, Masterclasses and online Communities. We create and deliver events in the Defence, Security, Energy, Utilities, Finance and Pharmaceutical industries. We pride ourselves on having access to the world’s most forward-thinking opinion leaders and visionaries, allowing us to bring our communities together to Learn, Engage, Share and Network. More information can be found at http://www.smi-online.co.uk.

The Difference Between Dairy-Free and…