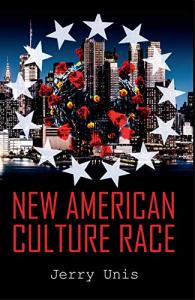 LOS ANGELES, CALIFORNIA, UNITED STATES, April 19, 2022 /EINPresswire.com/ -- Lawyer Jerry Unis’ New American Culture Race captures readers’ attention as it talks and centers about how the American culture is growing, learning, and changing — a growing and vital topic for this generation and the next.

New American Culture Race is a short treatise about the ongoing and modern social unrest, COVID-19 and its effect on American society and our evolution as a culture in response to this threat. Aside from the fact that it opens the readers' eyes to a new perspective about one of history's biggest worldwide crises, this book also highlights the struggles and foreseen certain outcomes based upon our American cultural response.

History has known world-changing events, some of which were plagues. COVID-19 will without a doubt change the world as well. We all pretty much know that. Jerry provides an inciting perspective based on both human nature and current politics while also applying how most people are likely to react and how this can be a tool for a more positive outcome. We will see changes if we investigate through inquiry and observation. However, not all the changes are obvious. The changes do influence some other areas of our existence. To that end, the New American Culture Race points that out.

How do we shop? How do we invest? What do we invest in? Time, money, energy? As a human being, certain habits and biological predictions are nearly certain. This insightful book explores these questions and observations and hopefully provides readers a more than satisfactory answer. Jerry Unis, the “must-watch-out” author of New American Culture Race, has been a lawyer for 30 plus years and resides in Orange County, California. He is currently spending his time at home taking care of his wife of 25 years and twin eighteen-year-old boys. He was born in South Western Pennsylvania in Hopewell Township where his father worked in the steel mill and functioned as Chief of Police and a police officer for more than three decades. After graduating from the University of Colorado, Jerry moved to California to be with family and has lived there ever since. He later attended law school, earned his JD, and began practicing in California in 1987. Having counseled thousands of individuals in legal, practical, and spiritual pursuits, Jerry is better equipped than most to deal with the human spirit and psyche. Common sense issues not being recognized nor dealt with by the politicians in charge as the country proceeded through the pandemic and social unrest gave rise to the need for the book New American Culture Race.