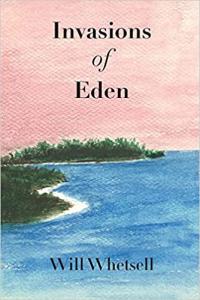 LOS ANGELES, CALIFORNIA, UNITED STATES, April 19, 2022 /EINPresswire.com/ -- Author Will Whetsell will be one of the featured authors in the upcoming Los Angeles Festival of Books 2022 with his published book titled Invasions of Eden. It is a science fiction novel about the disclosure of a baffling and deadly neurological illness in a hospital in Atlanta. Cassandra Garriman, who is her 39-year-old, a smart, talented, ambitious, and strong-willed doctor, traces where the disease came from in her words. The illness was traced back to a deserted island off the coast of South Carolina.

Cassandra found its alarming potential, though neither infectious nor contagious, the events that happen can alert the regional or even the national. The island is in an emergency state as of the announcement made by Cassandra. Health threats may be seen as bioterrorism, international espionage, or even geopolitical turmoil. What will happen to the island? There shall be an action to be made. It must be stopped!

Will Whetsell is a native of South Carolina. He is a neurologist and neuropathologist. Currently, he is living in Nashville, Tennessee.

Invasions of Eden
Written by: Will Whetsell
Paperback |