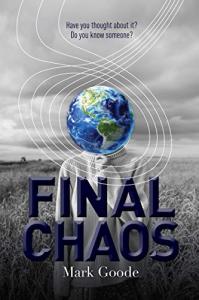 LOS ANGELES, CALIFORNIA, UNITED STATES, April 19, 2022 /EINPresswire.com/ -- Mark Goode’s recently published book Final Chaos is a combination of fiction, science, and a lot of creative imagination. The main story is that of brilliant expert scientist Angela Starr and her fictional discoveries about the regulation of life cycles in plants. The drama reveals the future of a planet struggling with inadequate resources and environmental changes.

Chaos flourishes at every level as societal, environmental, and biological aspects align and erupt in the World Water Wars. In a world withered by climate change, where the global population has been driven underground, and all life on the surface teeters on the brink of disastrous collapse, Jack Jennings joins the Aquaterrians to fight the government faction for control of the world’s most precious resource: water. On the battlefield, caught in the tightening trap of rampant self-destruction, Jack Jennings desperately seeks a way to prevent more self-harm while the world demands
answers.

Author Mark Goode takes us in a fascinating thought experiment that challenges answers about the real world’s suicide pandemic. This expedition inward explores the relationships between biology, apoptosis, chaos, and neuroscience and describes the first-ever behavioral toxin. “Final Chaos isn’t a tale about Good vs. Evil, but a journey through cellular biology, neurobiology, aging research, and military environmentalism as seen through the lens of chaos theory. But the storyline and its surprising ending are decoys. You’re being led along an introspective journey into how your own chaotic psychological life processes might resolve themselves—or not.” “...But Goode doesn’t leave you hanging with just the question that you too are susceptible to the chaotic forces of life, but he leaves you with viable strategies to offset your vulnerabilities.”— Robert Friedman, Amazon customer review.