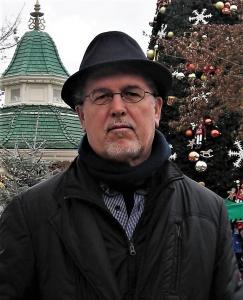 "Android Generation" tells the story of the ex-inmate Dick van Dick who becomes protagonist in spite of himself the conquest of a new world by humanity.

CAGLIARI, ITALY, April 26, 2022 /EINPresswire.com/ -- Nick van Dyck is an inmate in Ganymede's sidereal prison, sentenced to thirty years for the crime of computer piracy to who is offered early release if he agrees to join the federal army engaged in the conquest of an extrasolar planet inhabited by a race of mysterious aliens. In Paul De Montes' "Android Generation," readers will see the attempt of the protagonist to escape from his imprisonment to avoid the conscription into a war he doesn't believe, but also the events that will then lead him to meet the female android named Levis who will contribute in a decisive way to the evolution of the whole story.

De Montes' novel is a complex and fully realized tapestry, a work of worldbuilding that serves as the canvas for a multidimensional story that contemplates humanity's place in the universe and how, despite radical advances that bend the very rules of physics, mankind remains the same at its core: determined to conquer more lands and people. This insatiable urge has extended beyond the solar system and is poised to subjugate another species, a civilization left with no choice but to defend itself. Ironically, in this setting, humans are the alien invaders. And even before this colonial undertaking, humanity was already acting on its prejudices by creating androids, new beings similar to themselves, only to treat them as subalterns.

Van Nick, the antihero of "Android Generation" is stuck in this status quo and must find a way to extricate himself from his prison sentence and humanity's warpath in order to simply return to be free to decide his own future. For this reason, he is also forced to accept the help of another strange character, a mafia boss named Oz who provides him with the resources he needs to fulfill his plan, but in the end even this false friendship will reveal as a wretched trap that hiding his ultimate elimination.

Additionally, while Van Dick tries to get out unscathed of this situation and to finally find his freedom, humanity's attempt to colonize the new world and defeat the indigenous Ashi is further complicated by the presence of mysterious entities composed of pure spirit, who aim to preserve the planet from the greed and longing of the invaders.

"I believe that even a small contribution can be somehow evaluated and appreciated and added to the list of books to read these days which sees a significant rebirth of the science fiction in general. I therefore invite passionate readers to read 'Android Generation,' sure as I am that in the end it will be worth to have taken the time to browse its pages." The author Paul de Montes says.

"Android Generation" is a multilayered narrative that asks hard questions and immerses readers in a setting that will challenge their imaginations, in the vein of classic works of science fiction.

About the Author
Paul de Montes is the pseudonym of an Italian writer who has published numerous books, especially thrillers, in his country and who wants to expand his experiences in other realities such as that of the United States and in general in all English-speaking countries. To this purpose proposes this science fiction novel entitled "Android Generation" hoping that it will meet the satisfaction of a wider audience.