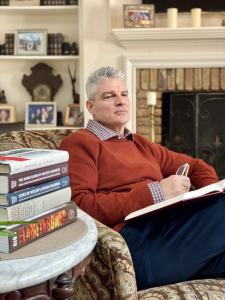 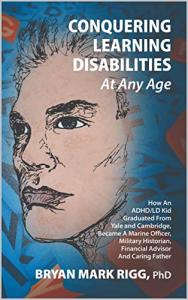 Rigg shares all of himself as he candidly describes his journey, including childhood mishaps and adventures and the struggle to learn and achieve.

As a boy, he was a tornado who couldn’t speak intelligibly, couldn’t control his temper, and was as likely to be found on the roof as he was on the ground. At the age of 8 he could neither read nor write. Experts told Merilee Rigg that Bryan was so learning disabled he was “academically hopeless.”

Today, this boy is a man who speaks several languages, earned a bachelor’s degree at Yale University with honors in history, and received the prestigious Henry Fellowship to conduct graduate studies at Cambridge University in England, where he completed his master’s degree and Ph.D. in history. After serving in the Israel Defense Forces, he earned a commission in the U.S. Marine Corp, followed by a career on Wall Street and CEO of a financial planning firm. He shares his journey in CONQUERING LEARNING DISABILITIES AT ANY AGE: How an ADHD/LD Kid Graduated from Yale and Cambridge, and Became a Marine Officer, Military Historian, Financial Advisor and Caring Father (Fidelis Press; April 26, 2022).

Internationally known as a World War II historian, Rigg’s newest book is in part a memoir where he shares his personal experience in turning his unique gifts to his advantage. He believes that if he could utilize the creativity, unique ways of looking at the world, zany humor, and high energy levels his ADHD/dyslexia have given him, others who live with the same conditions can too. It’s time to embrace the possibilities and end the stigma of learning disabilities.

Rigg shares all of himself as he candidly describes his journey, including childhood mishaps and adventures, the struggle to learn and achieve, and his horrifying experience with sexual abuse. He provides solid, researched scientific information showing why the gene for ADHD and LD exists, why it continues to be passed down even now, and how this trait affects children and adults throughout their lives.

His takeaways and learning points provide clear insight into the subject, but what lies at the heart of the book is a vulnerable child who learned to use his differences to create a successful and accomplished life. It’s a story that will reassure parents and provide them with insight as to how to get help for their children—and themselves—and uplift readers to realize their fullest potential. CONQUERING LEARNING DISABILITIES AT ANY AGE is a clarion call to embrace the gifts that come with neurodivergence and find the solutions that best work for you.

BRYAN MARK RIGG is an author, military historian, retired Marine officer, educator, financial planner, and devoted father. He is the author of several acclaimed books on World War II history, including Hitler’s Jewish Soldiers (2002), Rescued from the Reich (2004), Lives of Hitler’s Jewish Soldier (2009), The Rabbi Saved by Hitler’s Soldiers (2016) and Flamethrower (2020). He attended Yale University and graduated with honors in 1996 majoring in history, German studies and English. Yale awarded him the Henry Fellowship to attend Cambridge University, where he earned his M.A. in 1997 and his Ph.D. in 2002.