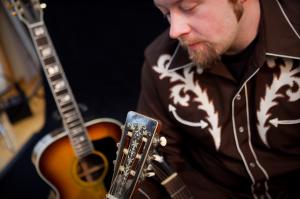 This is a flagship moment for me in the LA scene. We are going to put on one heck of a show and I have a bunch of LA's best players behind me to make sure.”
— Matt Axton

LOS ANGELES, CA, UNITED STATES, April 20, 2022 /EINPresswire.com/ -- Up-and-coming Americana performer Matt Axton is on a mission in the new year. He just released his latest official music video for his critically acclaimed song, Blue Sky Rain; now, Axton will be performing at one of Los Angeles' best live music and Country-Americana events/series, “The Grand Ole Echo”. Every Sunday from April through September, The Grand Ole Echo presents the best of LA's American and roots music. Axton will specifically be performing on Sunday, April 24th at 7 pm (show 3-9 pm). The Grand Ole Echo is hosted at The Echo in Echo Park, Los Angeles CA. Matt will play his new single Blue Sky Rain as well as more of his original Country-Americana songs. As with every show, Matt will honor his dad, Hoyt Axton, by performing a few of Hoyt's original songs to keep his fathers spirit and music alive.

Like his father, Hoyt Axton, who played the Grand Ole Opry in Nashville countless times during his music career, Matt is proud to play the West Coast’s Grand Ole Echo. The Grand Ole Echo is Los Angeles' premiere music event for Country-Americana. “It’s an honor to be playing on this stage and be in a lineup with so many talented Los Angeles-based Americana country-grass artists, each bringing their own distinct flavor to the show," states Axton. “This is a flagship moment for me in the LA scene. We are going to put on one heck of a show and I have a bunch of LA's best players behind me to make sure.” Matt will be accompanied by Los Angeles-based musicians: Matt Brundrett (drums), Ryan Posner (bass), Taylor Kropp (guitar), Korey Simeone (fiddle), Kenny Feinstein (other), and Brenda Carsey (backup vocals).

Matt Axton is a songwriter, vocalist, guitarist, solo performer, and bandleader with a wide range of skills. His music is a combination of folk, funk, country, blues, and rock that he describes as a "humble slice of Americana." Matt was born and raised at Lake Tahoe, California, and traveled to Los Angeles to bring his mountain tunes to the city, carrying on the family tradition. Boasting over 300 original songs, Matt is making his mark in the musical universe with a single and video release of Blue Sky Rain. Matt is continuing a family musical legacy that began with his grandmother Mae Boren Axton, who co-wrote Heartbreak Hotel for Elvis, and continued with his father, Hoyt Axton, a legendary country-folk star with dozens of hits under his belt, like Joy to the World (“Jeremiah was a bullfrog”), Never been to Spain, The Pusher, and many others.

Axton continues, “Although I am relatively new to the Los Angeles music scene, I’m not new to the life of a musician, and I have seen what ingredients it takes to create a true organic music scene. And I can tell you LA has it bubbling under the surface right now. In this strange semi-post covid atmosphere there is unique energy, the artist is supporting each other and everybody's creative game is being raised because of it. With a true emphasis on originality, especially in the Americana scene on the Eastside, I'm just glad I can throw some ingredients into this strange brew.”