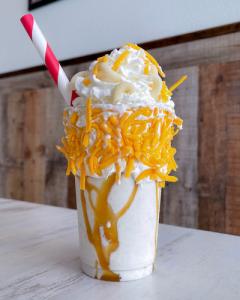 We never expected the amount of attention the video has attracted, but it's been a fun ride interacting with new MacCheesy fans and spreading our cheesy love with everyone.”
— Sherif A. Magd
JOPLIN, MISSOURI, UNITED STATES, April 27, 2022 /EINPresswire.com/ -- For a select few, it was a cheesy dream come true. But the overwhelming majority couldn't stomach the thought of it. That was the web's reaction to Joplin-based MacCheesy’s latest menu item, the Deluxe Mac & Cheese Milkshake. But luckily. for those calling the mac and cheese restaurant crazy, it was all an April Fools' ploy, and one that paid off big for the restaurant, with the video going viral on TikTok.

In the video, MacCheesy’s shows off its cheese-laden creation proudly displayed in a cup adorned with bright orange mac and cheese around the rim. The video then shows the team making the milkshake by blending vanilla ice cream, mac and cheese, and milk. The chunky treat is finished off with a drizzle of caramel, whipped cream, plain elbow noodles, and a sprinkle of cheddar cheese.

The video was an instant hit for both its inventiveness for some and gross factor for others. Comments on the video ranged from “Please actually sell this, it looks good!” to “I’m calling the cops!”

Over the course of the days following April Fools' Day, the video racked up over 6 million views, 364,000 likes, and 35,000 comments on TikTok. The response prompted MacCheesy’s team to release a few follow-up videos reacting to some of the best comments and a behind-the-scenes look at the restaurant’s team’s reaction to the cheesy concoction.

“We thought the Deluxe Mac & Cheese Milkshake would be a hilarious way to get into the April Fools' fun in a way that could be believable due to our menu," said Sherif A. Magd, owner and founder of MacCheesy's. "We never expected the amount of attention the video has attracted, but it's been a fun ride interacting with new MacCheesy fans and spreading our cheesy love with everyone.”