Latest News
Home /Blog/Larkin Simpson, EVP of Louisiana Central, Recognized As of One of the Top 50 Economic Developers in North America 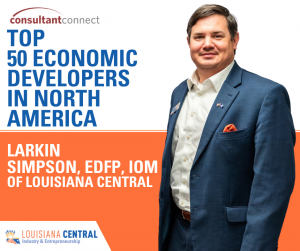 We believe this recognition for Larkin Simpson is earned and well deserved. Larkin demonstrates excellence and professionalism in all aspects of economic development.”
— Jim Clinton, President & CEO of Louisiana Central

"We believe this recognition for Larkin Simpson is earned and well deserved," Jim Clinton, President & CEO of Louisiana Central said. "Larkin demonstrates excellence and professionalism in all aspects of economic development. He also keeps up with trends and best practices as he provides effective leadership and vision for our organization. It is exciting for Louisiana Central and Larkin to be recognized as part of such an elite group of economic developers."

Larkin and other recipients will be presented their awards at Consultant Connect’s ECONOMIX event in Columbus, OH this December. “Releasing the Top 50 list is one of Consultant Connect’s favorite times of the year because we are so passionate about recognizing economic development leaders’ transformative work. This year’s group faced hurdles unlike any other Top 50 group has seen over the past year, and we are honored to provide a platform for them to be recognized for the passionate commitment they’ve made to their communities,” said Carla Sones, managing director of Consultant Connect. This annual list recognizing North America’s Top 50 Economic Developers is designed to acknowledge top leaders in this field and elevate the conversation around economic development and job creation.

Simpson, a Mississippi native, joined the Louisiana Central team in 2017. He has a Master's Degree in Economic Development with an emphasis in Technology-Led Economic Development from the University of Southern Mississippi and a Bachelor’s degree from Delta State University, Larkin has been recognized both on a state and southeastern regional level for his many accomplishments in economic and community development, leadership development, marketing, and advertising, and organizational management.