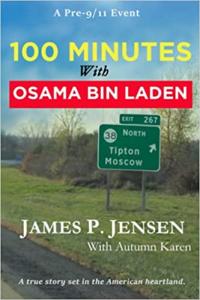 IOWA CITY, USA, April 27, 2022 /EINPresswire.com/ -- When people think of Iowa, it`s usually seas of green with corn and soybean farms. It's definitely not Al-Qaeda accomplices in the Midwest. People, including the U.S. government, surely didn`t imagine that in 2001, amidst the agricultural heartland, terrorists were scheming just off the interstate highways.

100 Minutes With Osama bin Laden describes a chance encounter with the Al-Qaeda leader and his henchman at a roadside convenience store on September 3rd,2001. The store`s owner, James Jensen, knew at once that these were not your typical gas and go customers. A week later when 9/11 hit, Jim was sure that this encounter was evidence of criminal activity. There was no turning back. That experience set him on a mission of discovery. This book is the first of a series in progress that explores the web of terrorism in the middle of America.

Read this gripping non-fiction account of Osama bin Laden with James Jensen 8 days prior to the 9/11 attacks in Iowa.

Raised by carpenters, pony shows, and fast-pitch softball crowds, this native Iowan ran into something he couldn`t accomplish himself. With as much effort as I couldn`t get done. To produce this story, which has to share with the world, would not have been possible without a ghostwriter, editor, and book cover artist. All extraordinary people who took on a very difficult assignment and made have a life of their own.Thank you Thank you (wanna know me....ask, I'll be around)