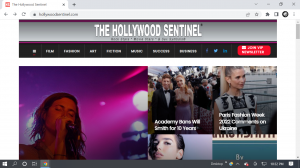 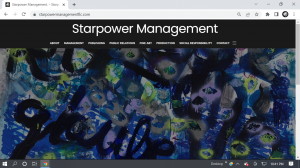 About The Hollywood Sentinel

Unlike many publications which have claimed to report only the good news long after The Hollywood Sentinel’s creation, The Hollywood Sentinel actually does and always has. Also importantly, it does not advocate or promote any aspects contrary to an all-natural, healthy lifestyle. Unlike most other publications, Hollywood Sentinel is privately funded, and while it accepts select advertisers, it can exist without them. It also accepts no advertising from any pharmaceutical, tobacco, or alcohol companies.

Exclusive Interviews with the Stars

Hollywood Sentinel gives free help to those aspiring in Hollywood, and teaches “positive thinking,” avoiding traps of the ego, and “doing good for ourselves and others.” Issues of Hollywood Sentinel have featured exclusive interviews with film and TV star Tracy Reiner from "A League of Their Own", Donny Most from "Happy Days,", Julie Newmar from TV's "Batman," film and TV star Joe Mantegna from the hit show "Criminal Minds," music stars Nervo, and New York Times contributing writer and best-selling author of "Collu$ion," Nomi Prins among many others. The site was recently re-designed this month, providing optimal compatibility worldwide on all formats.

Poet, writer, producer, director, filmmaker, and serial entrepreneur, Bruce has interviewed and photographed some of the biggest stars and most intriguing characters of our time in the world of pop-culture and counterculture. Bruce Edwin’s companies now represent billions of dollars’ worth of deals, and numerous stars, as well as some of the most influential and powerful companies and persons on the planet.

CEO of Starpower Management, founding publisher of Hollywood Sentinel, Bruce Edwin Productions, and Hollywood Sentinel Public Relations, Bruce Edwin represents companies with dozens of Oscar Winning, Golden Globe Winning, Grammy winning stars, and famous Master Works of Fine Art in private collection, among more. Formerly representing Michael Jackson guitarist David Williams, he began his Hollywood entertainment career as a Reader for Lakeshore Entertainment and Production Assistant at the TV show EXTRA! Prior to that, he worked as a model and talent agent, booker, and scout. Prior to that, he self-published his own music and film publication, distributed worldwide by Tower Records, through which he interviewed and photographed many stars. His production company Bruce Edwin Productions represents over 120 intellectual property deals including numerous films now in development.

Bruce Edwin’s charitable work includes helping to educate parents on how to keep kids safe in Hollywood, teaching aspiring actors and models how to succeed, and the prevention of child trafficking.
Visit: www.BruceEdwin.com

Starpower Management is a multi-million-dollar motion picture production, management, publishing, and public relations entertainment company. Recognized as one of the most powerful entertainment boutique company's in the world, the company represents over ten billion dollars-worth of deals in the areas of master works of fine art, literary property, runway and fashion models, celebrities, Grammy Award winners, entertainment companies, billionaires, and small businesses among more. Visit: www.StarpowerManagementLLC.com
Visit: IMDB at: https://www.imdb.com/find?q=starpower+management+&ref_=nv_sr_sm

From early rock fanzines and chapbooks to a hard copy glossy cover rock magazine, Starpower Management now owns publishes Hollywood Sentinel dot com, and will later bring back its rock publication online and hard copy. It is also launching a new movie star site this quarter and has five books of poetry in preparation with its upcoming new publishing label. It will later expand to include a comic book division to tie in with its motion picture department.

Writer, Photographer, Videographer / Vlogger, Fashion Model, App developer, Social Media Manager, E-Commerce Expert (experienced in creating and managing stores on Etsy, Shopify, Amazon, Kindle, Audible, etc.,) Salesperson (phone or in person), Personal Assistant (Los Angeles based). Visit the companies social media links below for further information or contact the company through its website below. All candidates must be based in the United States with the legal right to work in the U.S. Tel: 310-226-7176

Visit the Hollywood Sentinel at: www.HollywoodSentinel.com

Starpower Management, Hollywood Sentinel, and Bruce Edwin Productions condemns the cancelling and discrimination of those who are innocent Russian persons who have nothing to do with the war. The company further greatly condemns the unprovoked invasion of Ukraine as well as that of any other country, and prays for peace. To help Ukrainian artists including the company's Ukraine based clients, contact the company at the links herein.