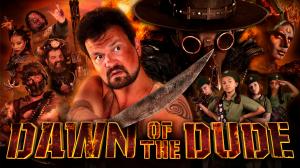 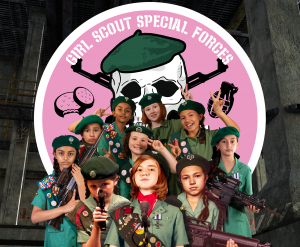 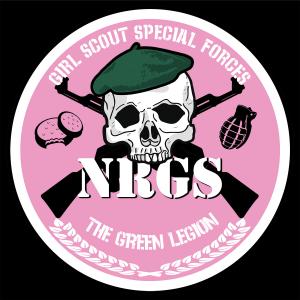 Girl scout commandos will battle with zombie hordes for dominance and thin mints in a new post-apocalyptic show in Austin, TX.

Our goal is to heal the collective soul and spirit of Austin by employing as many Austin artists as possible. Help us make this show by pledging to our Kickstarter campaign at dawnofthedude.wtf.”
— David Gutierrez
AUSTIN, TEXAS, USA, April 25, 2022 /EINPresswire.com/ -- A new show in Austin, TX aims to transform its residents into zombies to battle girl scout commandos. The show’s creators, David Gutierrez and Siegen Bretzke are local Austin filmmakers who are certainly living up to the city’s motto of “Keep Austin Weird.” The show takes place in a post-apocalyptic wasteland where various factions, including girl scout warlords, battle for supremacy while zombies and giant squid monsters roam freely adding to the chaos, and the weirdness level. The show is called Dawn of the Dude. A short 27-second trailer is available on YouTube.

One of the goals for the Dawn of the Dude team, dubbed the zombie transition program, is to turn Austinites into zombies. They plan to shoot scenes with large zombie hordes and have partnered with local special effects makeup artists to zombify poor tributes or rather background talent as they are called in the film industry.

Production starts in late Fall of 2022. The production is currently in the fundraising phase. The show website www.dawnofthedude.wtf currently links to their Kickstarter campaign. The domain name is not the traditional .com, but it seems to aptly represent the weirdly fun premise of the show.