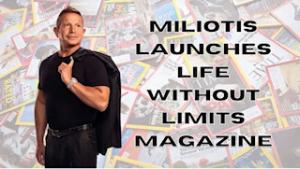 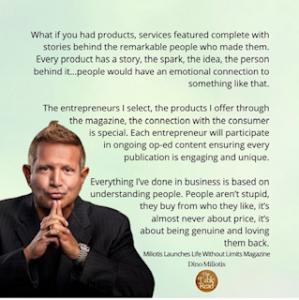 In the Table Read UK 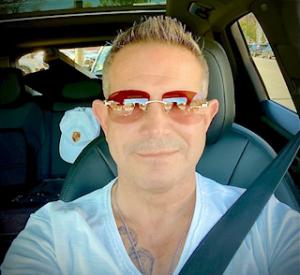 "I just love the response...26 feature stories and counting!"

WILMINGTON, NORTH CAROLINA, UNITED STATES, April 25, 2022 /EINPresswire.com/ -- Billionaire entrepreneur Dino Miliotis announced today the launch of his online magazine, 'Life Without Limits.' The magazine is the latest in his string of successful ventures gaining attention. "My magazine is such a natural fit for today's advertiser, reader, and consumer " explains Miliotis. "It's never been done before, so when lightning strikes you gotta act fast."

Life Without Limits Magazine is scheduled to go live June 1st. The magazine promises to offer a unique perspective, stand out, as Miliotis puts it, from the thousands of publications available today. "What if you had products, services featured complete with stories behind the remarkable people who made them," explains Miliotis. "Every product has a story, the spark, the idea, the person behind it...people would have an emotional connection to something like that."

Miliotis is personally selecting entrepreneurs to feature in his monthly publication, giving each a chance to tell their story, explain their product and make it available for sale through his magazine portal. "The entrepreneurs I select, the products I offer through the magazine, the connection with the consumer is special" says Miliotis. "Each entrepreneur will participate in ongoing op-ed content ensuring every publication is engaging and unique."

The magazine is free to consumers and according to Miliotis, featured entrepreneurs enter into a pay-as-you-go advertising schedule, paying a royalty of 20% of the net profit only as products are sold. "But there's a twist to this marketing plan to make sure that everyone has skin in the game, and pride in the magazine as a whole" he explains. "In addition to their own sales, each will benefit from a percentage of the revenue generated from the entire catalogue...monthly dividends...it's unheard of!"

Just minutes after his announcement today, calls have been nonstop. "You've gotta understand people...I want to speak to everyone personally," said Miliotis. "This is very special, 26 feauture stories and counting."

Understanding people has made Miliotis a very wealthy man. For more than 30 years he has been a driving force in business. Using a style that he describes as 'truly unorthodox by any business standard,' this college dropout was featured in the pages of Forbes, Entrepreneur and People Magazine. Best known as the inventor of an all-natural insect repelling wristband, Bug-Ban, (infused with citronella and geranium oil) he made a fortune stocking the shelves of retail America. "Two moments with Bug Ban stick out in my mind," says Miliotis. "The day I got the call to go on Oprah and the day I smashed QVC's sales record in 7 minutes flat!" Miliotis didn't stop there. He was instrumental in taking a fledgling concept, outsourced payroll, turning it into a multi-billion-dollar-a-year empire he reigned over for nearly two decades. After announcing his retirement in 2020, Miliotis wrote his memoir, 'There Is No Box,' which was published in the middle of the Covid-19 pandemic. The book sparked a grassroots movement, the mantra, a message of hope. In 2021 he founded Foundation Fundraisers to help raise awareness for causes worldwide and was named CFO of the non-profit Hyer Calling Foundation.

"Everything I've done in business is based on understanding people," he explains. "People aren't stupid, they buy from who they like, it's almost never about price, it's about being genuine and loving them back."

To contact Life Without Limits Magazine call (910) 599-2854 or email dinomiliotis@gmail.com

SURPRISE! The new web-series has…