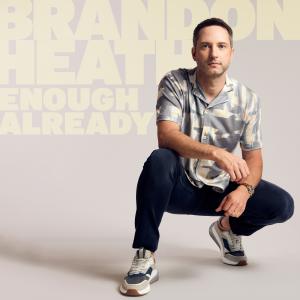 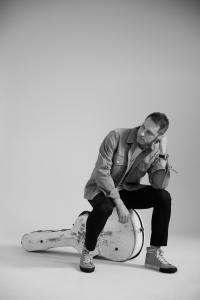 Things are crazy, but it’s not the time to lose our head, throw up our hands and dig ourselves into a hole. It’s time to love our neighbor. That’s what God has called us to do...”
— Brandon Heath
NASHVILLE, TN, UNITED STATES, April 22, 2022 /EINPresswire.com/ -- Five-time GRAMMY®-nominated, eight-time Dove Award-winning Brandon Heath releases his first full-length, Centricity Music album, Enough Already, today (April 22). Available now at digital and streaming outlets everywhere, the album features the No. 7 and climbing AC Indicator Billboard radio hit, “See Me Through It,” and eight more tracks that find Heath addressing faith-shaping questions and collaborating with multiple producers and songwriters.

A healthy mix of ready-made hits and deep cuts, Enough Already also exposes the singer’s hidden insecurities, like his ever-present struggle with feeling like he never quite measures up.

“It’s a real weakness for me, but I also realize there’s a lot of people out there who can relate to that. So I decided to kind of allow it to have more space in my life and to let it affect my songwriting,” Heath shares. “This has been a season of me rediscovering what I mean to God, and it has really just given me a lot of peace and a sense of belonging.”

This hard-won realization emboldens the title-cut that holds a lighthearted double meaning. “I don’t need anything or anyone else to tell me what I’m worth. God has already defined my worth. He already calls me son. He already recognizes me as redeemed,” Heath contends. “There’s really nothing in this world that could give me more meaning and purpose than what God already gives me.”

Leaning further into the Enough Already central theme, Heath breaks down the core elements of belief on “That’s Enough” while the autobiographical “He Is Not Worried” relies on Heath’s signature storytelling. Depicting a full circle moment from his childhood all the way back to the present day raising two kids of his own, the selection explores the way a father sets the tone for his family. The Gospel-tinged track asks a pivotal question that has become a personal compass for Heath: Is my Heavenly Father worried? The question is timely considering the fear that’s currently running rampant on a global scale.

“Things are crazy,” Heath concedes, “but it’s not the time to lose our head, throw up our hands and dig ourselves into a hole. It’s time to love our neighbor. That’s what God has called us to do — to love and see our neighbor, because I know they’re scared like I am. So I’m trying to be more in tune with the people around me and just find ways to say, ‘Hey, we’re loved. We’re not alone.’”

The seeds of Heath’s new songs were planted in his backyard, a place where he has spent a good portion of time over the past year thinking, praying and mowing his steep plot of land that includes a small creek, a play set for his young daughters and a fire pit for the men’s group that meets at his house. Essentially, his backyard is the place where his next album has grown.

Ironically, when the pandemic shut down touring in 2020, Heath spent an unexpected amount of time in other people’s backyards. He decided to play small, safe outdoor shows by invitation-only in select backyards across the country. These “Brandon in the Backyard” dates were so enjoyable that Heath is making plans now to play his new hits and fan favorites at an additional 30 backyards this spring and summer.

About Brandon Heath:
A Nashville native, Heath quickly won the hearts of listeners when he released his major label debut in 2006. Along with his GRAMMY nominations, an American Music Award nod and an Emmy Award, Heath has three Billboard No. 1 singles to his credit, including “I'm Not Who I Was,” “Your Love” and the RIAA Platinum-certified “Give Me Your Eyes.” His eight Dove Awards include two consecutive Male Vocalist honors (2009, 2010) and a win for Song of the Year (“Give Me Your Eyes”). He has also been recognized as a top lyricist in his field with numerous songwriting accolades, including being named BMI’s 2014 Songwriter of the Year. Heath’s artistry and ability to connect with audiences have compelled wide media coverage across the nation to platform his story and music. Highlights include coverage in The New York Times, Billboard, People, The Wall Street Journal, Relevant, CBS Evening News, The Discovery Channel and as a presenter on the 54th Annual GRAMMY® Awards.