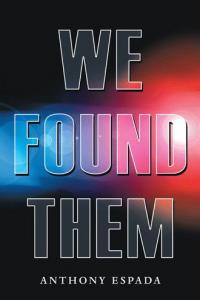 2 Adam 23, can you head to 2210 Seymour Avenue? There is a female on the line calling and stating she is Amanda Berry, and she has been kidnapped for ten years and is requesting help.”
— Excerpt from We Found Them
LOS ANGELES, CALIFORNIA, UNITED STATES, April 18, 2022 /EINPresswire.com/ -- Author Anthony Espada will be one of the featured authors at the upcoming Los Angeles Festival of Books 2022 with his published book titled We Found Them. This thrilling book takes us back in time to the true-to-life story of Espada's struggles growing up. The book details his experience in the Marines and his experiences in combat. This story highlights hope, survival, resilience, and rescue, shared bravely and honestly as a celebration amongst unexpected heroes.

It started on May 6, 2013. Cleveland Police Officer Anthony Espada’s life changed forever when a call came from 2210 Seymour Avenue, claiming to be Amanda Berry, who had been missing for the past ten years. Espada and his partner arrived on the scene and confirmed the woman in question was indeed Amanda Berry and rescued her and two other women. Due to the discovery, Espada, along with the entire Cleveland Police Department, received international attention.

“Good book, and what a crazy life. Would love to say thank you for your many many years of service. I would like to see the stigma of showing emotion go away, but sadly it’s still around. I have recommended this book to many of my brothers and sisters in my LEO family.”
— Amazon Customer Review

Anthony Espada is a Marine Corps Combat Veteran who retired from the Cleveland Police Department in Ohio after twenty-five years of service. During his tenure in his police service, he was one of the primary officers involved in the rescue of three missing young women in Cleveland in 2013, which became a worldwide news event.

We Found Them
Written by: Anthony Espada
Kindle |
Paperback |