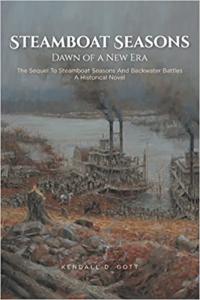 Author Attracts Us with The Sequel of the Historical Novel: Steamboat Seasons and Backwater Battles

Economically, the Northern states emerged from the war virtually unscathed. The industry is on the rise, and a new wave of immigrants from Europe is streaming into the country seeking a better life.”
— Excerpt from Steamboat Seasons: The Sequel
LOS ANGELES, CALIFORNIA, UNITED STATES, April 19, 2022 /EINPresswire.com/ -- Author Kendall D. Gott will be one of the featured authors at the upcoming Los Angeles Festival of Books 2022 with his published book entitled Steamboat Seasons: Dawn of a New Era. This book is the sequel to Steamboat Seasons And Backwater Battles: A Historical Novel. It continues the tale of the captain and his steamboat in the years after the American Civil War. The captain finds little remains unchanged in his life when he returns. He and his lover, Ann, rejoice, but conflicts arise.

A native of Illinois, Kendall D. Gott received his degree in History from Western Illinois University and a master’s degree in Military Art and Science from the US Army Command and General Staff College. Prior to returning to Leavenworth, Kansas, in 2002, he was an adjunct professor of history at Augusta State University and the George Military College. He appeared in many renowned television shows and discussed history. He retired from twenty years with the US Army in 2000 as an Armor and Military Intelligence Officer. He retired from government service after fifteen years. Mr. Gott continued his teaching profession.