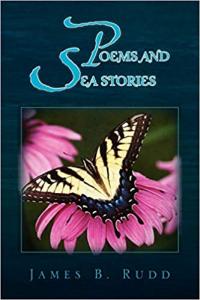 Collection of Fifty Literary Pieces to Celebrate The Adventures of Life

Adventure isn’t hanging off a rope on the side of a mountain. Adventure is an attitude we must apply to the day-to-day obstacles of life.”
— John Amat
LOS ANGELES, CALIFORNIA, UNITED STATES, April 18, 2022 /EINPresswire.com/ -- Author James B. Rudd will be one of the featured authors at the upcoming Los Angeles Festival of Books 2022 with his published book titled Poems and Sea Stories. A collection of over fifty literary pieces that remind us of days past and celebrate the adventures of life. A unique anthology that is divided into four parts, and each part deals with a different aspect of life. It will never fail to entertain, comfort, and inspire both teenagers and people who are young at heart.

“... He was just so interesting, and I could tell he had led quite a life. I caught him as he was walking out for a while, talking. He learned he had written a book of poems, so I went home that evening and ordered the book. I have enjoyed his writing style and the events of his life of military service and his career after leaving. He had such a positive outlook and was such a proud American and had such a love for his country. Having met him, it made it a special read.”
— Linda Fisher, Amazon Customer Review

James B. Rudd graduated from Oklahoma University before serving as a US Naval Officer. He spent his military career during the Vietnam War and in the Philippines. After that, Mr. Rudd went to Southern Europe to aid a commander-in-chief. After his military career, he obtained a Master’s degree in International Business from the Thunderbird School. James traveled and became president of an international company. Then, he earned a Master of Science in Clinical Psychology, and he now writes, consulting on international business and cognitive-behavioral therapy.

Poems and Sea Stories
Written by: James B. Rudd
Paperback |