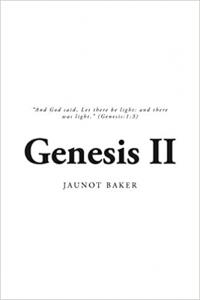 I will point out different scriptures from different books in the same book, keeping in mind the words and storylines are meant to follow one another in a logical manner.”
— Excerpt from Genesis II
LOS ANGELES, CALIFORNIA, UNITED STATES, April 19, 2022 /EINPresswire.com/ -- Author Jaunot Baker will be one of the featured authors at the upcoming Los Angeles Festival of Books 2022 with his published book titled Genesis II. A religious book behind the story was made underneath the first Genesis story. It featured confidential terms that are sacred and can be fully valued when they have their original Hebrew meanings. It tells the story of two worlds; one of an Adam in the image and likeness of God, and the other Adam made from the dust of the ground. It’s a world where a woman gives birth to an immortal as well as a mortal son.

The two worlds existed like a parallel world as conspiracy theories shared. Different times and environments, but the stories are the same. A literary work that unlocks the mystery and has a definite message for humans from God in this generation.

Jaunot Baker is an author who survived the streets of Chicago and San Francisco and whose greatest happiness in life is trusting, in God’s words. He published the book to help reveal what had been concealed underneath the first book and unravel the sacred secret across the texts.