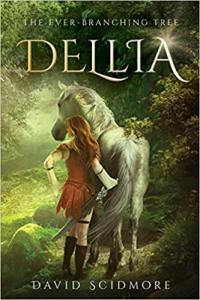 She shook her head. "Sitting in your lab, alone, with your one experiment, is a waste of human capital."”
— Excerpt from Dellia
LOS ANGELES, CALIFORNIA, UNITED STATES, April 20, 2022 /EINPresswire.com/ -- David Scidmore’s Dellia (The Ever-Branching Tree) is an epic high-fantasy novel that blends alternate worlds, action, adventure, and dire peril, with political intrigue, a generous dollop of romance, and a pinch of humor. David’s work is set to appear at Authors Press’ exhibit for the Los Angeles Times Festival of Books, slated for April 23 & 24 at the University of Southern California Campus.

The narrative revolves around Jon, a physicist transported to an alternate dimension caused by an accident in his lab. He finds himself in the realms of Meerdon, a primitive world of impossible phenomena and terrifying creatures. Utterly bewildered by the series of events, he crosses paths with the titular Dellia, a compassionate warrior and protector sent by a council that believes Jon is the subject of an ancient prophecy.

With themes of betrayal, love, and redemption, David’s work is the quintessential novel of the fantasy genre.

David is a lifelong fan of fantasy and science fiction. He is currently working on the sequel, “Aylun” which tells the other half of “Dellia.”

Grab your copies of this enthralling novel at Amazon, Barnes & Noble, and other online retailers.